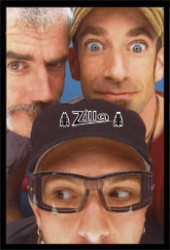 Forming in Bolder, CO, Zilla began as a quintet before changing to its current three man roster comprised of acclaimed musicians: Michael Travis, Aaron Holstein, and Jamie Janover. Michael Travis (drums, percussion, keyboards) has spent over a decade as the driving percussive force in the nationally popular String Cheese Incident. Travis continues to be an innovator of improvisational drumming, managing to play hand percussion while simultaneously keeping incredible rhythm with a kit. Aaron Holstein (guitar, bass, sampler) has had a long and lush musical history, playing guitar with bands such as Boogie Shoes and The Vibe Squad. Holsteins progression has transformed him from the notion of a typical guitar player, to an applauded adapter leaving behind the traditional notions of what it is to jam with a guitar or bass. His playing focuses on the whole of the sound, rather than the individual instrument. Jamie Janover (hammered dulcimer, mini-kit, percussion, sampler, electric kalimba, electric sitar, mini-electric kalimba) is a world renowned hammered dulcimer wizard whose list of band credits is more than impressive. One time hammered dulcimer Player of the Year, Janover continues to expand the limits of his instruments, creating a fusion between the timeless sounds of the dulcimer and the pertinent call of todays modern dance scene.

While each individuals accomplishments are impressive, the group identity theory behind Zilla is what truly makes the band unique. The constant focus of the group is to create a whole, complete sound devoid of noodles, wanking, solos and other characteristics that plaque improvisational music today. The music strives to serve all participating, including the audience. No one in the band has any idea what is going to happen a nanosecond ahead of time; they rely on their instincts and musical history together to create a sound that rarely strives from its intended direction. The collective whole is truly the dominant force in this band.

The music itself is a plethora of grooves, beats, and highly percussive breaks which cause the listener to become engulfed within the sonic vortex of sounds encompassing them. The band plays on pure emotion, so each night is different and varied, and no song is ever the same. ZIlla is about being as aware as humanly possible when youre in the moment. The band plays, the crowd reacts, the band reacts and so on and so on. A cyclical paradigm is created in which everyone plays a part. Its a whole new form of tension-release music in which the music never has to resolve itself in order to sustain the mood. It merely adapts and heads in whatever direction dictated by the experience.

Essentailly, Zilla is the ultimate live experience. Many bands try to accomplish the amount of music communication that these three musicians employ their entire careers. This band is all about the music first, which is how it should be. The music plays the band, and not the other way around. Their infectious energy has crowds across the nation dancing up a storm to a completely new band of musical experience. MySpaceCustomizer

THE ZILLA - Up All Night