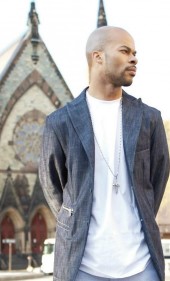 They dynamic voices of Youthful Praise have been wowing audiences for over sixteen years. Formerly known as the Teens of T.F.T. they have grown within their home church of Turner's Faith Temple (Bridgeport, CT), into an effective ministry that dazzles and delights through the gift of song.

In August of 2001, after much anticipation, the choir released their first live recording Awesome God on Evidence Gospel label, a division of Gospelflava.com. The smash title single "Awesome God" caught on with church choirs nationwide and spread faster than anyone ever imagined. The song has been performed over and over, but none quite like the original, first recorded by YP.

Their mid 2004 release Thank You For The Change featured more of the same great mix of choral praise, contemporary gospel and straight-up church songs like "Bless Him," "I Shall Praise" and "U There" featuring Cheryl "Coko" Gamble, formerly of SWV. This project received a Stellar Award nomination for Choir of the year, as well as one of 'Kirk's picks' from the Hopeville 2 Tour last fall featuring Yolanda Adams, Pastor Donnie McClurkin and Kirk Franklin.

Now YP is back, and better than ever. Released on August 23rd, Youthful Praise featuring James Hairston, Live! The Praise. . . The Worship is a refreshing blend of the YP sound you've come to love, with a fresh new choral approach to songs geared towards the Worship and Praise experience.

"Traditionally these types of songs are sung by smaller ensembles," says Hairston, "but this was the vision and dream of mine, it was God-purposed for me to go this route. And because of my obedience to God, it has paid off for me tremendously as well as spiritually. This is a good season for us, it feels good to be YP." Hairston adds, "Our last CD was a wonderful project, and its title, Thank You For The Change, is also actually very fitting for this new project too. While you get a taste of the old YP, we hope to ultimately take you to another area of worship which I believe reflects our growth not only vocally but spiritually."

With songs like 'You Are So Awesome,' 'Incredible God, Incredible Praise' & 'Praise To The Rock,' this CD is sure to resonate in the souls and spirits of not just gospel music lovers, but Christians everywhere, regardless of race, genre or denomination. One thing is for sure, 'God is AWESOME.'

Following in the reputable vocal lineage of their pastor and first lady, Bishop J.C. and Evangelist Gloria White (former director and soloist of the renowned Institutional Radio Choir), Youthful Praise raise the bar for choral excellence. With an unparalleled energy and poise, the choir's television appearances have included Late Night with Conan O'Brien in 2002, The Stellar Awards and Bobby Jones Gospel in both 2002 and 2003. Appreciated for their choral expertise, Joan Osbourne, Shirley Caesar and Destiny's Child have all utilized this choir's ministry talent for performances.

Minister James Hairston, Jr. continues to write most of the material Youthful Praise sings as well as songs for Pastor Hezekiah Walker and others. He is also very busy on the workshop and seminar circuit for colleges, churches and youth groups across the country. With stellar vocal technique and an unsurpassed energy, Hairston and YP are the ultimate combination: add to that a corps of cutting edge musicians under the direction of Eric Davis and the package is complete.

Youthful Praise is poised for breakthrough, and ready to let the world know just how awesome He is.

YOU DESERVE IT JJ. HAIRSTON & YOUTHFUL PRAISE By EydelyWorshipLivingGodChannel

JJ Hairston & Youthful Praise - It Pushed Me (AUDIO ONLY)