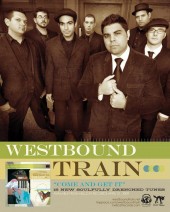 …Westbound Train wants to be your gateway drug.

Shattering musical boundaries while embracing the best of several genres, the septet has fully come into their own with Come and Get It, their second Hellcat release. The new album invites listeners on a journey, traveling through all of the band’s previous influences while creating an exciting new sound that they are eager to reveal to the world in 2009.

"We are a band that isn't afraid to take risks. We take what we do seriously," explains lead vocalist/trombone player and band co-founder Obi Fernandez. "I hope that we can be a band that makes people want to trace our music back to its sources - Sam Cooke, the Four Tops, The Maytals, or whomever. The farther you go back, the more you realize that all of these styles that sound a lot different today have a whole lot in common."

After years of nonstop touring in support of their Hellcat debut, Transitions, the band’s members took some time off from touring to refocus and further improve the cohesion of the group. They soon enlisted new members Eric Novod (drums) and Luke Penella (tenor sax), whose shared love of soul and jazz greatly contributed to the new sounds found on Come and Get It.

Compared to the band’s three previous albums, Come and Get It is the best representation of Westbound Train to be captured on record thus far. Two stand-out tracks include "So Many Things a Man Can Say," an old-school ballad that captures Fernandez’s love of the Motown sound, and the highly orchestrated second track, "Ain't Gonna Be Easy," written about Fernandez’s father. "In addition to the song being about my father, a lot of stuff was going on that was making life a little more complicated," Fernandez says.

“Check Your Time,” is a reggae track near and dear to Fernandez’s heart that features the band’s infectious groove and a sing-along chorus that is sure to become a new fan favorite.

The album’s hard-hitting title track, co-written by bassist Thaddeus Merritt, mixes two different points-of-view with dazzling effect. “I wrote it with Thad, so you get his perspective and my perspective in the same song,” Obi explains. “The song is really a conversation revolving around what I’ve been through along with what I’ve seen Thad go through. It makes it a really fun one to perform every night.”

Additionally, the ska tune "Cheers The World's Almost Over" serves as a mission statement for what Westbound Train has always dreamed to be as a band. "I just love the groove of the song," Fernandez says. "As a songwriter, I really enjoyed sharing the chorus of that tune with the band. Everything about that song encompasses our sound, our vibe, what we're about."

When the time came to capture this newfound Westbound sound on tape, the band brought in the legendary Dave Hillyard (Slackers, Rocksteady 7) to produce Come and Get It. "Dave had great ideas about everything," Obi explains. "He's all about the music and really knows how to get performances out of people. He definitely brought the jazz mentality to the table – and it’s definitely helped us in the way we think about playing our new tunes – and our old tunes as well. It's not so much about the execution as it is about what we’re trying to say. He is really talented. I loved working with him."

The release of Come and Get It has offered Westbound Train a unique moment to think about their legacy, and how they ultimately want to be perceived as they move forward.

"We want to make music for everyone. I want to be known as being in a band with great musicians who want to have a great time and can take people somewhere regardless of where they're at, or what they’re into," Obi says thoughtfully. "By the end of the show, we'll have you smiling and dancing and hopefully during our time together the world seemed to be a much better place. I hope we can be that band for people."

Westbound Train consists of Obi Fernandez (vocals, trombone), Rich Graiko (trumpet) Luke Penella (tenor sax), Gideon Blumethal (keyboards), John DeCarlo (guitar), Thad Merritt (bass), and Eric Novod (drums). The band has toured throughout the U.S. and Europe on multiple occasions since its inception in 2001, sharing the stage with the likes of Rancid, The Mighty Mighty Bosstones, Goldfinger, The Skatalites and The Toasters.  The band and has released four albums: Searching for a Melody 2003, Five to Two 2005, Transitions 2006, and Come and Get It 2009. Westbound Train has been on Hellcat Records since 2006 and is represented by Strong Fire Entertainment.  The band can be reached at their website, www.westboundtrain.net.

Westbound Train - For the First Time