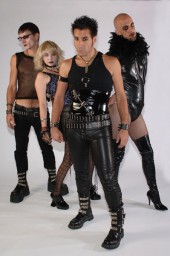 HISTOIRE COURTEThe Diabolique siblings were born in France but taken from each other at an early age. They grew up and lived separately around the world, but in 2004 Didier, Dominique, Jean-Luc, and Solange reunited in North Carolina, to make music that they send out into the world with the hope that it will reach their missing sister and the band's namesake: Veronique Diabolique

for a spare moment

they make my heart bleed

they are looking for

jean-luc on the drums

only the bass rings

a contrast to the dark one

sings for her soulmate

FAMILY HISTORYThe end of the 1960's was a turbulent time in France. Away from the turmoil but amidst the backdrop of student strikes and riots, the country's emergence as a nuclear power, and the good news paradox of Louffrani's yellow smiley face, lived our happy family. Our father, a mime who subsidized his income from the avenues as a choreographer for Peggy Fleming, and our mother, an Algerian born engineer directing the aerospace Project de la Concorde. Passionately in love with each other and the blessings of life, they had five children: Did, S, JL, Dom & V. Up to this point our memories are dim, but from this point our story grows dark.

Veronique has forever been little more than an angel and ghost to us, her brothers and sister. She left us at an early age, we may never know whether she was sent or taken, and went to a convent in the country side. A brilliant and capricious child, she was known and cherished by all for both her striking beauty and the inscrutably forlorn songs she sang. We were heartbroken when she left, sunk in to a melancholy from which we may never emerge. Our parents could barely speak of her departure, struggling through sobs only to tell us "It is too painful and sorrowful for our innocent children to bear this truth, but perhaps one day it shall be revealed."

Only a few somber days after Veronique was gone from our home, we, three brothers and sister, awoke before dawn to a grey sky more ominous than any we could have ever imagined. A magistrate rang at the door, arriving before the sun, and demanded to see our parents. But when we went to wake them, they were nowhere to be found. "They have left you alone?" he cried. "Abandoned? Or perhaps they have already been alerted."

"You children remain here, while I continue my investigations" he said. "This mystery is too deep and the tale unfolding too horrific for your tender youth."

Only later did we become aware that the events of that night, heralded by the magistrates arrival, would preclude the sun ever rising again to bring light into our bleak future. Sometime during the night, the convent that housed, but we knew could never be home to Veronique, had erupted into flames. The entire compound was in ruins, with the exception of one bed, the bed that had been Veronique's . It was determined that no one died in the fire, and everyone had escaped to safety and was accounted for. Everyone, that is, except our Veronique. She was nowhere to be found.

Durham's Veronique Diabolique claims it's from France, sings in French and dresses in fetish gear and makeup. Its members romanticize dark poets and the spooky side of '80s New Wave. If it all sounds so contrived, it is. After all, Baudelaire's The Flowers of Evil has already spawned too many undergrad, black-clad bands around the world.

But Veronique Diabolique largely sidesteps the usual goth pitfalls on their second EP, the six-song Café Solitude. The band's musicianship—led by the searing guitar of Solange Diabolique—redeems Veronique Diabolique from the overwrought, melodramatic mush of its peers. On "Le Matin Crepusculaire" and "La Paresse," the two noisest tracks here, Solange drapes sheets of screeching feedback and effects over everything. In the latter song, the guitar acts as a beacon, unhinged from any sense of rhythm or song. Slow ballads will be the death of goth, but in songs like these, there's fire. Solange owes much of his guitar sound to Bauhaus' Daniel Ash's school of music, like many goth guitarists. But most people forget about Bauhaus' early, unfettered tribal punk or that Vivienne Westwood and Malcolm McLaren's first London boutique was called Sex. These Durhamites didn't.

".an excellent debut from an act that has been able to tap into a movement in a fresh and exciting way. Theyre entertaining and literate, sounding vaguely like the Velvet Underground would if they lived in Paris instead of New York. When it all comes together, I cant help but love it despite myself."ReGen Magazine, August 2005, by rikm

Mick Mercer selected "Carte Postale" as one of the Best EP's of 2005: "Véronique Diabolique are wonderfully wayward, edgy and evocative."The Mick, No. 22