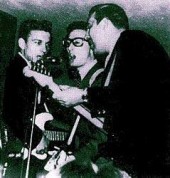 Location:
DALLAS, Texas, US
Type:
Artist / Band / Musician
Genre:
Roots Music / Rockabilly / Country
Label:
Indie
Type:
Indie
BioConnections
Kevin Montgomery
Danny White
Sara Petite
Bob Montgomery
Songs in the Sun Festival-Key West
Songs in the Sun-Crete
Tommy started his musical career in Claremore, Oklahoma in 1949 with the "Oklahoma Swingbillies." In 1950 he went to work with fiddle player Art Davis in Miami, Oklahoma; from there to the Cowboy Inn in Wichita, Kansas with singer, fiddle player Jimmy Hall. In 1952 and 1953, he moved back to Tulsa, Oklahoma to join the "Johnnie Lee Wills Band." From 1953 to 1958, he had his own band, "The Southernaires" in Lawton, Oklahoma with homebase being the Southern Club.

In 1958, Tommy's career would take a different direction. On a trip to Clovis, New Mexico to record at Norman Petty's famous studio, he met the late Buddy Holly. In April, he started playing lead guitar with Holly and the Crickets. He continued playing with Buddy until the fatal plane crash that took Buddy's life, along with the Big Bopper, and Ritchie Valens. It was Allsup who flipped a coin with Ritchie Valens for a seat on the ill-fated plane.

After Holly's death, Allsup moved to California to join Liberty Records as A & R Director of all Country and Western product to begin producing the great Bob Wills and the Texas Playboys. His association with Wills lasted through Wills' "For The Last Time" LP, recorded on December 2-3, 1973, in Dallas, Texas, where Bob Wills recorded his first records in 1935. Allsup used some of the original Texas Playboys on the last recording (McAulliff, Shamblin, Dacus, Strickland). Bob Wills directed the sessions from his wheel chair.

While at Liberty, Tommy would produce Tex Williams, Willie Nelson, Joe Carson, Warren Smith, Billy Mize, and Cliff Crofford. While there, he worked with great artists such as Walter Brennan, Bobby Vee, Johnny Burnette, Julie London, and Vickie Carr, who sang harmony with Bob Wills on the LP "Bob Wills Sings and Plays." After leaving California, Allsup moved to Nashville to head up Metromedia Records in 1968. In 1972, he met Ray Benson and Asleep At The Wheel and produced their first LP for United Artist Records. Later he produced 4 LPs for Capitol Records with the group.

Tommy still lives in Ft. Worth, Texas where he remains active in the music business. He has played guitar or bass on over 6500 recording sessions. All of this is good enough for Tommy Allsup, who has few regrets. "I never really wanted to be a big star, I figured I'd leave that to someone else."

Check out the video about the upcoming UK tour, and the recent recording in Nashville!!!!