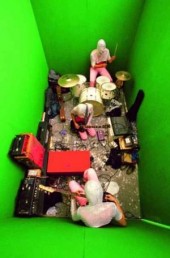 Location:
Montello, IT
Type:
Artist / Band / Musician
Genre:
Other
Site(s):
Site
Label:
GSL www.goldstandardlabs.com
Type:
Indie
BioConnections
Gold Standard Laboratories
Year Future
Sissy Spacek
WITH LOVE is a quartet formed in the Italian countryside sometime in 1995. The band shortly made a name for themselves with their wild and aggressive live shows in every type of venue, from squats to clubs, friends' gardens, in the woods and even at folk festivals. After many shows around Italy and the rest of Europe, the band managed to record their first album With Love (Green Records, 1998) followed shortly by I Love Cul De Sac (Green Records, 2000), both considered essential releases for the Italian punk scene. With Love combine a range of influences—from American bands such as Heroin, Angel Hair, and Crimson Curse, to Italian bands like Nagazione and Indigesti.

In 2004, the band released the critically acclaimed Tuoni Fulmini Saette (Heroine, 2004), an insane mix of violent and fast hardcore with ambient, noise and progressive edges. In 2005, they completed recording of the follow-up, A Great Circle—essentially a single, long track created to accompany singer Nico Vascellari's short film of the same name. Based on three live performances created and staged in three locations (an art gallery, a museum and a forest), it was released by GSL on DVD in June 2006.

"Think of You" - Christina Grimmie - With Love

"With Love" - Christina Grimmie - With Love