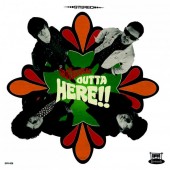 Location:
US
Type:
Artist / Band / Musician
Genre:
Garage
Site(s):
Site
Label:
Dionysus Records, USA / Soundflat Records, GER
Type:
Indie
BioConnections
The Staggers
Little Steven's Underground Garage
THE HIGHER STATE
THE HARA KEE REES
The Electric Prunes
FUMESTONES
The Sound Explosion
The Gonks
THE KNIGHTS OF FUZZ
El Beasto Recordings & Tours
Dionysus Records
Th' Losin Streaks
Wicked Cool Records
BeatRevolver
The Loons
The 1-2-5
The Tropics
The Crusaders
ironbar-studios
THE SATELLITERS are known as Garage band with a 60s fuzz sound now since 1993; these four gifted guys have delivered some of the finest modern garage rock albums on renowned labels such as the US Garage cult label DIONYSUS RECORDS and SCREAMING APPLE - they also released a 7'' on SOUNDFLAT RECORDS. Their distinctive organ-driven sound together with the strong vocals have won over a large fanbase and now they present us their new album OUTTA HERE. The album, available both as CD and LP, offers an archetypal and authentic Garage sound that might just as well have been recorded in the 1960s. Compared to their previous two albums, the record is a little bit more back to the roots and thereby perfect for any lover of 60s Garage Punk and fuzz guitars. The album starts off with the ingenious and catchy song 'Outta Here', which is followed by several wild Garage pieces, as usual fittingly accompanied by organ that reaches its climax in the masterpiece 'Lost in Time'. Their cover version of THE MODDS' 'Leave my House' has a bit more beat to it than the original and needless to say, bears the unmistakable SATELLITERS vocals. The song 'Waste of Time' reminds one a lot of bands like THE MUSIC MACHINE, while 'Eyes cry Tears' could be best compared to THE MIRACLE WORKERS. THE GOLDEN DAWNs 'Seeing is Believing' is a slightly more quiet midtempo song which fits very well within the twelve songs. The new album OUTTA HERE by THE SATELLITERS is pure 60s Garage Rock; authentic, stirring and 100 % danceable.
SOUNDFLAT RECORDS, 2010.

SOME REVIEWS ON THE LATEST RELEASES:

NEW LP/ CD "Where Do We Go?" DIONYSUS Records/ USA

The Satelliters have endured lineup changes and one major image adjustment but through it all their status as a kick-ass German garage rock outfit has stayed constant as the circling of the planets. Since their first seven-inch in 1994, their distinctive pop hooks and fuzz-laden guitar riffs have grown richer and sweeter.
Taking a cue from theatrical Bay Area budget rockers like the Mummies, the Ripoffs and the Trashwomen, the Satelliters started their career clad in matching black leather fetish masks and noir outfits. But their songs were always more polished and evolved than their San Francisco brethren, even when they pounded out crude punk rock whoppers like "I Hate You," on their 1995 Pinup Records 10," a split with the surf-rockin' Astronauts.
Fourteen years later the Satelliters have shed the masks, but their music has remained constant in its quality, as evidenced by the band's ninth album, available for a limited time in a chocolate-swirled vinyl re-pressing from Burbank's own Dionysus Records. The album gets off to a rousing start with "Abba," (watch the thrilling YouTube video below) and continues apace with a slew of atmospheric, psychedelic-infused stompers, including the triumphant title song, the diamond-sharp "You Cannot See," and the churning, keyboard-punctuated "Hey."
Known for audiophile-friendly mastering and a genuine affection for the colorful tradition of vinyl records, Dionysus is -- now that Sympathy for the Record Industry has left the building -- one of LA's final remaining high-class independent record labels. Check out their catalog of stellar releases -- including early L.A. punk like the Controllers and the Rotters, sinuous Exotica like Chaino and current garage rock luminaries like the Satelliters on www.dionysusrecords.com.
by Jason Gelt, LA Vinyl Records Examiner, 2009

The Satelliters - Girl It's Over

THE SATELLITERS - what's up with timothy dee's - FULL ALBUM