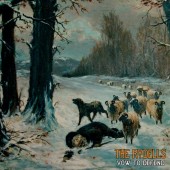 The Rydells formed in 2001, from preaviously experiences with Torquemada (1998, Ramones addicted) and Hotel Mathaus (second half '90s, hardcore).

Their influences are like a blend of the powerful sounds of bands like Social Distortion, Ramones, Misfits and the energy of Elvis Presley, Buddy Holly, Roy Orbison and most of the rock'n'roll artists of the '50s and '60s; songs about girls, parties, rock'n'roll, but also about unsatisfaction, boredom and fighting against the everyday life.

After some line-up changes, they came back with a new powerful record called "Vow to Defend" in 2008, out on Knowhere Records.

GET IN TOUCH WITH THE BAND

The Rydells - And Then She Kissed Me

07 "Stand Up Strong" The Rydells