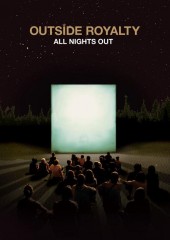 All Nights Out Now Available!

"Easily superior to anything created by Franz Ferdinand, Kasabian, Kaiser Chiefs, The Killers, Razorlight, Kooks, The View, The Fratellis, Bloc Party and Keane in the last couple of years"

"I fell in love with it immediately. How are these guys not signed?"

"Highly charged, frenetic and emotionally wrought. they have the driving mo-mo-mo-mentum of early Roxy Music."

"[Outside Royalty] are on the way up."

"The most engaging unsigned band I have ever witnessed"

METRO CLUB LIVE REVIEW: "…magnificent… Songs like 'Voice Beneath the Rubble' and 'A Lightbulb Turning Off' put almost anything on MTV to shame. They were truly outstanding…"

Outside Royalty are a 6 piece indie electro chamber rock band formed in Pittsburgh, Pennsylvania. The band moved across the water to England in the summer of 2006, and has ever since been attracting attention in all the right places.

Cutting their teeth in the few live music venues that Pittsburgh had to offer, an article ran in a local music magazine ‘The Front’, which talked of the Pittsburgh music scene's demise, and cried out to any talented bands: ‘get out now! Move to New York, move to LA!’ The piece led with a picture of Outside Royalty.

They chose none of the above, arriving recently in London with 4 original members remaining. After picking up a new bassist and cellist, and taking over a drafty Victorian terrace off the Archway Road, they've been seen around town wowing fans and journalists alike with their foot stomping, euphoric anthems.

They’ve toured with Young Knives, played with Babyshambles, The Duke Spirit, The Holloways, Juliette & the Licks, Spinto Band, The Shins, Good Shoes, been championed by Colin Murray with repeated spins on Radio 1, Gideon Coe, Tom Robinson and Steve Lamacq on 6music, and had three ‘sell out’ Club NME shows at Koko.