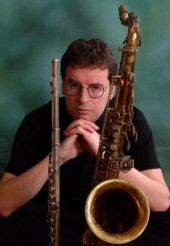 Location:
London, UK
Type:
Artist / Band / Musician
Genre:
Jazz / Progressive / Ambient
Site(s):
Site
Label:
33 Records / Ethersounds / Tonefloat / Moonjune
Type:
Indie
BioConnections
Steven Wilson
David Gilmour
Robert Fripp
Gong
Steve Lawson
Fear Falls Burning
SOFT MACHINE Legacy
Rob Hughes
tonefloat records
Cipher
Dave Sturt
Roy Dodds
Luca Formentini
Marc Parnell
Julian Ferraretto
I play tenor and soprano saxophones, flutes, and a bit of clarinet, recorders and keyboards too. I am based in London, UK and work in the worlds of jazz, progressive music and ambient electronica. Born in Birmingham, I started out in a band called Fundamental Furniture and also the Midland Youth Jazz Orchestra, then studied classical music at the University of Manchester specialising in performance and studying Shostakovitch whilst playing in various jazz groups at night. I have released ten solo albums, mainly on 33 Records and small independant labels, and a further twelve albums as group member or co-leader.
I was once described as “One of the very best young tenor players of this or any jazz eneration in Britain” by Digby Fairweather on BBC Radio 2 and was nominated as Rising Star in the 1996,1997 and 1999 British Jazz Awards. I have had the great pleasure and privilege of performing with my quartet at Ronnie Scott’s club in London many times playing opposite such bands as Irakere, Geri Allen, Cedar Walton, Jose Neto, Georgie Fame and Airto Moreira. My quartet tours regularly and our performance at the 1996 Glasgow International Jazz Festival was voted “Outstanding Concert as Voted by the Audience” for which I won the prestigious Scotrail Jazz Award. In 1998, 2002 and 2006 the quartet toured the Scottish Highlands and Islands visiting such remote places as Orkney, Iona and Lewis as well as travelling around the mainland coast.
In 1997 I formed the cutting edge free improvising trio Marshall Travis Wood with internationally respected drummer John Marshall and “wild card” guitarist Mark Wood. That same year I toured with Mick Karn, Richard Barbieri and Steve Jansen including a month in Japan. In many ways it was a watershed year for me.
I have had the privilege of playing and recording with some amazing musicians including Palle Mikkelborg who guested on my 2001 CD Heart of the Sun; Anja Garbarek (2001 album and tour); David Sylvian (Nine Horses CD); Steven Wilson (Porcupine Tree CDs , No Man, Bass Communion); Robert Fripp with whom I have a duo which has done many live performances as well as two CDs and other downloads and vinyls ; John Etheridge, Soft Machine Legacy; Richard Sinclair and Hatfield and the North; Dick Heckstall-Smith; Bill Bruford; Tony Coe; Bill Nelson, Pierre Moerlin, and the late Slim Gaillard. In 1999 I became a new member of Daevid Allen's Gong touring the USA, Europe, Japan, Scandinavia, and the UK and co-writing most of the group's album Zero to Infinity released in Feb 2000. I subsequently produced their live album Live to Infinitea, released in October 2000 and to date have played over 130 dates with them all over the world and appeared as featured soloist on 2 studio CDs, 4 Live CDs and 2 DVDs.
I have a group which inhabits the world of dark ambient electronica, called Cipher (with Dave Sturt) and we have written new music for various 1920’s silent films and performed them in cinemas live around the UK. See www.myspace.com/cipher/uk. I am interested in using loops, delays and effects with sax and flute and have a duo with bassist extraordinaire Steve Lawson. We have so far recorded on album and have gigged extensively. I am also a member of the new Progressive band - the Tangent (http://thetangent.org) which is doing great things at the moment.
My website is at http://www.theotravis.com and I do try and keep it up to date with gigs, recordings etc.

'Everything I Feared' by Double Talk LIVE in 2015