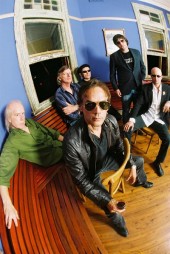 In 1996 the original line-up reformed for the Big Day Out. Guitarists Deniz Tek and Chris Masuak, and vocalist Rob Younger had all been creatively active in their own bands. They had maintained contact, occasionally working together with one another and keyboard player Pip Hoyle on various projects. They found that a unique chemistry and special presence returned when they played together as Radio Birdman.

Veteran bass player and long-time friend Jim Dickson then joined in 2000. After several local tours, built around appearances at events such as Homebake and The Falls, the group toured Europe, making festival appearances and sell-out club shows. The current line-up was completed last year with the arrival of Russell Hopkinson, well known for his role in You Am I and considered by many to be one of Australia's best rock drummers.

With a fresh rhythm section opening up new vistas of sonic exploration, the band spent the better part of last year readying an album of new material. Recently recorded in Sydney and produced by Deniz Tek with engineer Greg Wales, the album, Zeno Beach breaks much new ground and will defy expectations.

Radio Birdman are, and always have been, independent of the mainstream music industry. The new recording, as well as their live performance schedule, is totally self-financed and self-directed. They owe nothing to anyone. They see their independence as essential to maintaining complete artistic freedom. What you hear is solely the creative output of the band—not a marketing strategy.

Zeno Beach is slated for release in Australia at the end of June, and will be followed by a world tour starting in Australia at the end of July. After hitting the major centres of their home country, the band will then play over 30 shows in the Americas and Europe to promote local releases of the album. Please feel free to visit our official website for the most up to the moment information.

This year will be an eventful one for Radio Birdman and their many fans. Those who love the real thing are invited to climb aboard. It promises to be an amazing trip.