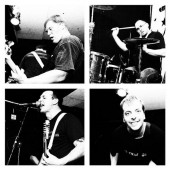 Location:
CHICAGO, ILLINOIS, US
Type:
Artist / Band / Musician
Genre:
Punk / Powerpop / Rock
Label:
www.undercomm.org www.redscare.net
Type:
Indie
BioConnections
The Queers
Dillinger Four
Naked Raygun
Red Scare
Fungus 53
The Soviettes
Riot Fest Music
THE MANGES
Atlas Studios
Fat City Magazine
The Methadones started as a side band in 1993 by Dan Schafer (AKA Danny Vapid) who then played in Screeching Weasel. After playing a handful of shows and with no real recordings to speak of, Schafer was forced to place the Methadones, seemingly forever on the back burner of Rock-n-Roll.

Over the next few years, with Schafer's projects such as the Riverdales and Mopes taking the spotlight, and later a cross country move and career change, the progression of the Methadones seemed ill-fated.Fast forward to 1999, the years passed and Schafer moved back to Chicago from Washington DC with a slew of songs determined to restart the band. He recruited fellow Mopes, B-face and Dan Lumley and headed to Sonic Iguana in Lafayette IN, to record their debut record "Ill at ease". After the recording, B-face and Lumley returned to their corners of the country due to geographical distance and comittments of their own. From there, Schafer went on to recruit fellow Chicagoans Pete Mittler and Mike Byrne (formerly Vindictives) to join. After several drummers, Michael Soucy, native to the Rhode Island and DC punk scenes, was enlisted to complete The Methadones. This core lineup has remained consistent since 2001.

With five full length records under their belt, "Ill at Ease" (AF Records-2001) "Career Objective-(Stardumb/Thick-2002)" Not Economicaly Viable- (Thick Records-2003)", "21st Century Powerpop Riot- (Red Scare-2006)" and latest "This Won't Hurt-(Red Scare-2007)", they will be heading back to Atlas studio in May of 2008 to record a split full length record with the Copyrights. Look for the new record to be released this year on Transparent, the new label of Dan Schafer and Adam Fletcher (Copyrights).

The Methadones have set out to unleash their own brand of hard hitting pop punk/power pop. And like clockwork, they deliver, proving to be a main stay in the pop punk community with no signs of slowing down.

The Methadones - Goodbye To You (freestyle guitar cover)

The Methadones - "You Don't Know Me Anymore"

The Methadones - "Say Goodbye To Your Generation"

The Methadones - Turning up the noise [HD]

The Methadones - Back Of My Hand (cover)

The Methadones - Straight Up Pop Song
▶ View All Videos