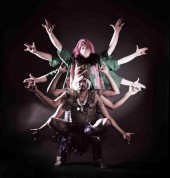 past in bands like Les Sexareenos or The Spaceshits. I

could tell you about King Khan's pseudo-celebrity in

Europe, or his own past in The Spaceshits, or his solo

work. But you probably wouldn't give a shit. So let's

talk about the real nitty gritty - The King Khan & BBQ

Show. First, I must say that these guys are fuckin

maintained that they would lay waste to this miserable

King Khan, and jamming out their black magick in his

like blood from a cancerous abcess. They took it easy,

outraged by their incredible sound and nasty live

the shows to this day. I've seen the blow-jobs and

blood, the pick-ups and puke, the dancing and the

tambourine with his bare feet, molesting his guitar

and singing like a possessed angel. The other spinning

and howling like a freak while belting it out on his

guitar like a real gone savage. What does it all sound

typical suspects into their descriptions as a defense

against the real sound: The Velvet Underground, 13th

The Users, The Sonics, The Cramps, Bo, Jerry Lee, The

Gonn. Their sound is all of this and more, but all

of their own. The show? A mess. Love songs, punkers,

sing-along stompers, wild rockers - you name it. They

always drench the crowd in raw energy, and they're

always the last ones dancing and drinking at the bar.

They've toured the US, Europe and South America. They

are international antiheroes and ambassadors. After a

sold-out 7-week tour of the USA this past autumn,

championed heavily by the American media, The King

and Europe to make clear what so many music fanatics

already know - they are easily one of the top, most

highly regarded rock'n'roll bands in the world. They

are coming to support Los Angeles' In The Red Records

Records. The band is at the top of their game, covered

by bands like The Black Lips and Jon Spencer's Heavy

world' right now. They are an awesomely surreal site

to behold; a stunning garage rock machine of the

never end. From youngsters to oldsters alike, their

crowds sing along incessantly and let their

freak-flags fly in joyous solidarity when The King

entranced dervishes to be a part of a growing

phenomenon. Give into their spell and live forever.