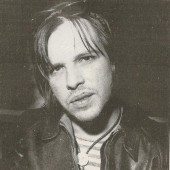 Location:
LOS ANGELES, California, US
Type:
Artist / Band / Musician
Genre:
Alternative / Punk / Indie
Site(s):
Site
Label:
Sympathy for the Record Industry
Type:
Indie
BioConnections
Kid Congo and The Pink Monkey Birds
The Gun Club were a rock band from Los Angeles in the 1980s and 90s, led by the flamboyant singer, ex-rock critic and Blondie fan Jeffrey Lee Pierce. They were one of the first bands to blend punk with blues, country, and other American roots musics.

The band was formed by Pierce and Kid Congo Powers and initially called the Creeping Ritual. They went through several lineup changes before settling on "The Gun Club," a name suggested by Circle Jerks singer Keith Morris.

Kid Congo left before the first album to join The Cramps but would return for Las Vegas Story, and he was replaced by Ward Dotson. Other notable members include bassist Rob Ritter and drummer Terry Graham, who had both previously been in The Bags. Rob left after the debut album to form 45 Grave, and changed his name to Rob Graves. Later, Patricia Morrison, then known as Pat Bag, one of the founders of The Bags, joined to play bass on two LPs Danse Kalinda Boom and Las Vegas Story before leaving to join The Sisters of Mercy and then The Damned.

Their first album, 1981's Fire of Love, is regarded as a classic by many rock critics. One critic has written that the "album's lyrical imagery is plundered from voodoo, '50's EC comics and the blues," 1 while another notes that "Nobody has heard music like this before or since."[1] Fire of Love sold well and arguably received the best reviews of any release from the band.

Along with The Cramps, X, Blasters and other bands, they set much of the tone for the Hollywood rock scene in the 1980s. Now based in Europe, Gun Club returned again in 1987 with the brilliant album Mother Juno, produced by Cocteau Twins' Robin Guthrie and featuring Kid Congo again, along with Romi Mori and Nick Sanderson.

In 1992, Pierce returned to his musical roots by recording an album of mostly pre-war blues songs with the British blues Guitarist Cypress Grove.

Pierce continued leading various incarnations of the Gun Club up until his untimely death in 1996, culminating in the acclaimed last album, Lucky Jim.

The Gun Club helped influence the so-called cowpunk or punk blues scene that developed in their wake and a wide variety of bands ranging from Social Distortion in the 1980s to The White Stripes, 16 Horsepower, The Starvations and the Starlite Desperation today.

You can purchase this brilliant film today (and watch clips on this page!), exclusively from French Fan Club Films!GHOST ON THE HIGHWAY Official Page. Limited quantities, so hurry!

hours in length DVD. Its a must have historical document for lovers

of Jeffrey Lee's music and life.

at Long Beach California's Bogarts nightclub from 1993 over an

hour or scorching brilliance with Jeffrey Lee on lead/solo guitar,

his performance will blow you away. They perform selections from

Lucky Jim as well as the early stuff. Kid Congo was replaced on

this tour by a british guitarist who fills in excellently, with

Romi Mori on bass and NIck Sanderson on drums. Filmed directly up

front you will feel you are actually there.

GHOST ON THE HIGHWAY: A PORTAIT OF JEFFREY LEE PIERCE AND THE GUN CLUB by KURT VOSS

The Gun Club - The House On Highland Ave
▶ View All Videos