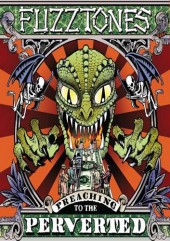 Location:
US
Type:
Artist / Band / Musician
Genre:
Garage / Psychedelic / Rock
Site(s):
Site
Label:
BOOKING
Type:
Indie
BioConnections
New York Dolls
The Sonics
Sun Records
The SEXTRESS
Rudi Protrudi & The Midnight Plow Boys
Link Protrudi & The Jaymen
THE LIVE ONES
FUZZ
TINA PEEL
Arso Vivo
The Fuzztones have certainly achieved legendary status as cult faves during their almost 30 year career. Their fiery brand of Garage-Psych Punk pre-dated the entire "Garage Revival" of the 1980's and has influenced hundreds of groups, from The Hives to The Horrors. Born in the summer of 1980 in the bowels of NYC's Lower East Side, The Fuzztones were soon regulars at legendary NYC hotspots such as CBGB, and the Mudd Club. By utilizing the fuzzbox (an antiquated effects pedal used by many 60's groups to achieve overly distorted "psychedelic" guitar sounds), the band created a raunchy sound they referred to as "Grunge".(On their 1984 debut single, "Bad News Travels Fast", lead guitarist Elan Portnoy is credited as playing "lead grunge", at least a decade before the Seattle Grunge Invasion), and the band was nicknamed "The Gurus of Garage Grunge." Complete with paisley and leather attire, genuine human bone necklaces, The Fuzztones influenced the fashions of musicians as diverse as the Hoodoo Gurus (who also modified the Fuzztones infamous skull and crossed Vox Phantom guitars logo for use on one of their album covers) to Ian Astbury and Marc Almond (who aped The Fuzztones by wearing black turtlenecks with bone necklaces) to the Dwarves, whose X-rated logo was stolen from the Fuzztones "Lysergic Ejaculations" cover. Finland's platinum selling rockers, 69 Eyes, and German superstars Die Artze even sport Fuzztones t-shirts in their promo photos! The band's classic video for "Ward 81" even inspired the legendary Ramones, whose "Psychotherapy" video copies several scenes directly from the Fuzztones' masterpiece, as did the glitter-rock docu-film "Velvet Goldmine"! The band's first European tour in 1985, a 3 month onslaught of England, Wales, Scotland, Germany and Italy, firmly established the band with a dedicated, and avid following that continues to this day! Their 1985 debut studio LP, "Lysergic Emanations" has achieved major cult status, and has been released by 3 different labels over the last 16 years, the combined sales of which has assured gold record status! The Fuzztones have toured Europe fervently since 1985, and have headlined major venues in Italy, Spain, Greece, France, Norway, Sweden, Belgium, Wales, Scotland, Austria, Germany, Czech Republic, Portugal, Denmark and Finland, as well as Canada, Israel, Prague, Serbia, Croatia and Mexico. During their illustrious 30 year career they have appeared on 78 vinyl and CD releases, including at least 15 albums, countless singles, and compilations, not to mention 5 videos, several television and radio appearances, and countless major press articles (NME, Sounds, Melody Maker, Rockerilla, Hit Parade, US,and more). They were the only band involved in the 80's "Garage Revival" to obtain a major label record deal (RCA). Since then they have released 3 singles, and 4 albums:"SALT FOR ZOMBIES," (2003) on Tribal Stomp (CD) and Misty Lane (LP), "LSD-25" (2005) on Get Back, "HORNY AS HELL" (2008) on Electrique Mudd (Unique) and No Fun (USA), and finally "LYSERGIC LEGACY," a "Best of" compilation on Cleopatra Records, that was released this year (2009). Get Back Records also re-released several classic Fuzztones albums in 2005, and Rolling Stone magazine included a Fuzztones track on a CD called "Fuzz-Tones," which was included with a 2007 issue.The Fuzztones were among the advertised headliners of the Little Steven Underground Garage Festival in 2004, which featured 42 bands, including The Strokes, NY Dolls, Iggy & The Stooges, Bo Diddley, Nancy Sinatra, and the Pretty Things. More recently they've headlined the Purple Weekend Festival in Leon, Spain, and the Stag-o-Lee Festival in Beverungen, Germany. They also co-headlined the Ink 'n' Iron Festival in Los Angeles with the legendary Sonics in 2009. The band will be headlining a televised segment of Rockpalast on October 10th (2009) and will be entering the recording studio soon. Plans are in motion to release their next studio album in 2010 in time to celebrate their 30 year anniversary. Meanwhile, a second Fuzztones tribute album, "Fuzztones Illegitimate Spawn 2," featuring 50 bands from around the world, will be released in October on England's Twist Records.

"(Rudi) gave us a decade of loyalty to the garage band style and sound, sticking to his guns to the benefit of the musical genre. His crossed Vox guitar tattoo will never fade and neither will the legacy of a band called The Fuzztones."

Tim Gassen from his book, Echoes In Time

In heat The Fuzztones

It Came In The Mail (Remastered)

The Fuzztones - In Heat

The Fuzztones - Gotta Get Some
▶ View All Videos