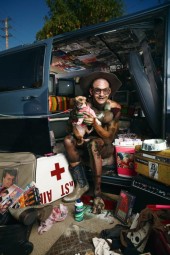 "With his Latest Release, VLLT, the Emotron Matures and Expands on Previous Musical Efforts. Many of the Songs are Familiar to his Long Time Fans, as having been Road Tested and Approved. Karaoke Night, Busted, Don't Tell me i'm Wrong are the Highlight’s of the New Album."

The Emotron Show has become Completely Overwhelming, Dark and Terrifying.

The Metamorph you have Undergone is Amazing, Truly Striking Stuff.

I haven't been struck by anything that hard in a while.

"You Were that Dude Wrapped Up in Rubberbands Last Night, Huh?"

Dude from None More Black

"Pure Evil came to Morgantown ast night. I’m not certain if I witnessed an interdimensional creature giving birth, an exorcism, or both simultaneously. All in all, I was happy to wake up the next morning, open my shutters, and realize the city was not razed to the ground.

Each time I’ve seen The Emotron, I have no idea what to expect. It’s like walking into a snuff film, without knowing ANYTHING. I have to say, it’s both frightening and wonderful, all in the same. I consider myself to have a strong stomach, but I remember catching myself wincing a couple times during his set: especially when The Emotron lit his penis on fire, back in 2009. Without a doubt, his performances have put hair on my chest, that’s for sure; and i have plenty of room for more!"

Everything was well in perspective and for once, I didn't so much see the Emotron as this disgusting schizophrenic episode interpreted into live art as much as a very clever individual doing precisely what he pleases.bigearsmusic.blogspot.com

The Emotron - Drink a beer

The Emotron - When Cancer Met Sally