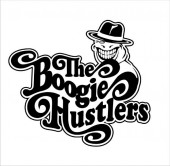 "[this] horn-powered, funk-fortified outfit mixes a little hip-hop influence into its groove-oriented, dance-heavy sound.Even if you can't shake your hips worth a nickel you may leap onto the dance floor when Boogie Hustlers start rolling" --Dave Richards --Erie Times-News

More from the Tribune-Review: Funk-soul: Turning over new leaf Call 2007 a year of transition for the Boogie Hustlers. They changed vocalists, adding the versatile Margot B. to the lineup. They released a second album, "True Colors," that is one of the better funk/soul albums by a local band in recent years. And they've become a steady presence at local clubs and events. The Boogie Hustlers close out the year with a 8:30 p.m. show Saturdayat Club Cafe, South Side. Also on the bill are CK9 and the Old E Allstars, and Jasper Lewis.

Regis Behe from the Pittsburgh Tribune-Review wrote a little piece on the new album. Here it is: CD reviews: Boogie Hustlers' show vibrant 'Colors' Sunday, November 18, 2007 'True Colors' Boogie Hustlers Three stars "True Colors" is the work of a band ascendant; musicians schooled in funk, hip hop and R&B, but good enough to put their own mark on the music. The Pittsburgh-based outfit has an inherent playfulness that comes through in "adidas" and "Don't Stop Believin'," but they are best when they stretch out, allowing the music taking unexpected turns and twists. "The Promise" kicks in with a horn chart worthy of Tower of Power, then settles into an intoxicating, dreamy flow that sounds like a funkified Steely Dan. A layer of synthesizers introduces "Freedom," then gives way to a Snoop Dogg/Dr. Dre sound. "Whenever Wherever Pt. 1" sounds like a cut from a John Legend session, and "Warm Breeze" despite a silly vocal intro, finds the Hustlers traipsing between Parliament/Funkadelic and Miles Davis. The Boogie Hustlers perform Wednesday at the Thunderbird Cafe in Lawrenceville and Saturday at the Warehouse Cafe in Bethel Park. --Regis Behe Aaron Jentzen of the Pittsburgh City Paper calls the new record "smooth and soulful" What do you think? ITunes user? Download the "122 Ellsworth" CD right here!

Rooted in the heavy pocket grooves of funky soul and jazz artists of past and present, the Boogie Hustlers collective began piecing itself together in 2003. Creating original music in the vein of their funk-forefathers the band started a forward-thinking musical evolution. Drawing from numerous styles including Soul, R&B, Hip-Hop, Funk, Jazz, Fusion, and time-tested Pop music, The Boogie Hustlers are four years deep into a journey of expanding musical horizons. Their mission: to bring positivity and spirituality back into the live music scene and onto the radio. On stage and on record what comes across is the honesty and passion of the players involved. The vision of bandleader and founding member Sean Rig is evident in every carefully orchestrated note and lyric on the album "122 Ellsworth," the group's debut release. Released in January 2006 the album quickly garnered critical acclaim beyond just the Pittsburgh music scene. Making it into high rotation airplay at WYEP-FM brought the Hustlers a new fanbase. Making it onto the reputable radio station's year-end top 50 Albums list gave the band an added boost and made their selection by Leeway's Homegrown Music Network as the Best New Band of 2006 that much sweeter. The Boogie Hustlers' realm of touring options began to open up. The Hustlers' live shows are where they really shine. Connecting to the audience with tight horns, crushing drums, super-funky guitars, badass bass, and two engaging vocalists of differing styles, the positivity they've made their mission comes out in full-on uplifting r&b/soul swing. The Boogie Hustlers are equally adept at soaring funky instrumentals, and have played venues on the soul, jam, jazz, and funk scenes all over the eastern half of the country. Vermont to Georgia, North Carolina to Illinois, New York City to Pittsburgh and everywhere in between fans that have been touched by the band's positive dance music, in turn, make it worthwhile for this rotating cast of musicians to spread the love in greater swaths of the country. On vocals, lyrics, and guitars Sean Rig represents the lower register of the Boogie Hustlers voice. Vince Wylie, also on vocals and lyrics, is the group's natural frontman, cruising the stage and singing soul-style. David Chapman Jamison rocks the drums, holding down the beat so strong it compels people to their feet. The other half of the super-funky guitars mentioned earlier, Ryan Meals, keeps the music steady and soulful day in, day out.

the boogie hustlers - in studio