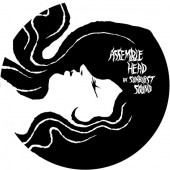 The band’s third LP, When Sweet Sleep Returned, is propelled to some extent by that same glorious distillate. But it also finds the group speaking their own twisted tongue more assuredly than ever—marrying hazy Saturday moods, interstellar sonics and wrecking-ball swing to song and harmony in poems for California, lovers, ghosts, the stars, and a world gone stark raving mad.

For When Sweet Sleep Returned, Assemble Head re-united with engineering mastermind Tim Green, who manned the controls for masterpieces from Howlin’ Rain, Comets on Fire, Six Organs of Admittance, and Earthless, as well as Assemble Head’s 2007 release Ekranoplan.

Elsewhere, When Sweet Sleep Returned finds Assemble Head exploring the sun-dappled terrain of daydreams on “The Slumbering Ones”, hard-chugging crust-fuzz boogie on “Clive and the Lyre”, bittersweet melodiousness on “By the Rippling Green”, and space-temple chorale chime on “Kolob Canyon.”

“If there were a soundtrack for Pranksters who went on a voyage in outer space, the Assemble Head would be first request. Assemble Head in Sunburst Sound shoebox is bigger than this album can appropriately fill. After all, they each grew up blasting varying musicians from their stereos, from the Music Machine to Dave Burrell to soundtracks from the spaghetti westerns. I foresee an array of explorations from these Westside jammers in the years to come, perhaps even a prophecy.”

“…A real nice slab of contempo psych. Guitar-soaked, but with Floydian star-clusters in some sections and others that are more like the vibe Crystalized Movements used to hit in their shorter, rockier songs."

The band’s sound is heavy and brooding, cut with tooth-tugging guitar tones and keyboards designed to fuzz your head out. This is the sound of psychedelic America in the 21st century—deeply rooted in the San Francisco hard-psych tradition, the guitars reminiscent of Quicksilver Messenger Service’s John Cipollina and Big Brother’s Sam Andrew—yet translated through all the punk and metal that’s happened since 1968.”

“The San Francisco group draw from fecund sources of hirsute, high-times motivators such as Amon Düül II, Pink Floyd, Hawkwind, and the colorful triumvirate of Deep Purple, Blue Cheer, and Black Sabbath. Assemble Head's latest full-length from Tee Pee Records, 2007's Ekranoplan, toggles between cavernous chaos and meditative meandering, like many of the finest psych-rock albums have done, from the '60s onward.”

Assemble Head in Sunburst Sound - End Under Down