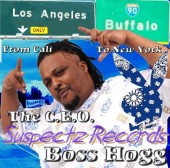 Location:
LOS ANGELES, California, US
Type:
Artist / Band / Musician
Genre:
Rap / Hyphy / Hip Hop
Site(s):
Site
Label:
Suspectz Records
Type:
Indie
BioConnections
JT the BIGGA FIGGA
ROLAND SLIM JONES
PHATMAC PROM.
Kamèl
Miz Streetz
Diggs
SUSPECTZ RECORDS
Rinnessy
Jimmy Black of ATH Inc
Wyze Sonz Cartel
PrymEvyl
JAI-DUKE
BOSS HOGG
He calls himself a "ghetto newscaster" and a big, big ladies man. At about 300 pounds. Boss Hogg's name is as unique as his appearance. He was born Robert Harper in South Central, Los Angeles27 years ago. He is the product of a single mother home.
"My mother was abused by my father and left on welfare. I had nowhere to turn but to a gangsta lifestyle because i grew up with a lot of confusion," Boss Hogg says. It's that confusion that inspires the critically acclaimed tunes that he produces today. Boss Hogg believes he would've ended up dead like so many young men he know, but rap music was his way out. Boss Hogg's first performance drew cheers from his classmates at 68th Street Elementary School in L.A. The positive experience has propelled him to where he is today.
Boss Hogg and Casanova met and instantly clicked due to their common goals and determination. They recruited Twisted (rapper) and Shorty Mac (vocalist) and labeled themselves Da Suspectz. The Lady Suspectz (dancers) joined them on stage. The group won the 1st place prize during their first performance at San Bernardino's Sturges Theater. Boss Hogg and Casanova started Suspectz Records and www.suspectzrecords.com in 2002 instead of trying to get a record label to sign them. Two of the groups's songs "early in the Morning" and "Game" became big hits on California radio stations KGGI 99.1 and KUCR 88.3 and are featured on a compilation cd entitled "Platinum Plus" whcih is being distributed in Ohio record stores and at www.cdbaby.com/cd/Ironfist1.
In 2003 Boss Hogg released his first official project intitled "Guilty Til Proven Innocent" on Suspectz Records label. He sold nearly 3000 copies to date and over 100,000 downloads. He then hooked up wit PrymEvyl and started a management company and a online radio show thats features up and coming independent artist.
In 2006 Boss Hogg played a major roll in the production of a group project Wyze Sonz Cartel "HATIN". The group consisted of PrymEvyl, Uniik & Boss Hogg. They produced a video for the title tracc and toured upstate New York. The even won an Upper State Independent Music Award for Best Hip Hop Group 2007.
In 2008 Boss Hogg got back to work rebuilding his Suspectz Records family, recruiting D-Nutt, M.O., Freddy-B, Jai-Duke, and is continiously looking to develope and expose up and coming artist. He also expanded his family, teaming up with Mactivity Productions to carft the sound of his up and coming full lenght CD, droping in 2009. On MAY 9th 2008 Boss Hogg released his first mix cd intitled R.A.P. vol. I "Tha Unda Hogg". The rest is history in the making !!!

SUSPECTZ IN THE HOUSE

SUSPECTZ IN THE HOUSE

GET IT WET BOSS HOGG.wmv