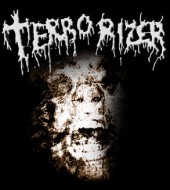 With an aggression and ferocity until then unheard the band took the scene by storm with the 1989 release of their highly acclaimed and genre-defining debut album, "World Downfall" (Earache Records). The album installed the band as a cult institution, despite their prompt disbanding, and the musicians went on to concentrate on their future main bands: Pete Sandoval (drums) with MORBID ANGEL and Jesse Pintado (guitars) with NAPALM DEATH.
With "World Downfall" TERRORIZER created the "Reign In Blood" of grindcore, inspiring a generation of bands, their popularity never waning through these intervening years. The massive amount of available bootleg recordings and band merchandise, as well as rumors of a follow-up album, kept the TERRORIZER name alive.
The eleven new tracks, as well as a new version of the band's classic"Dead Shall Rise" now entitled "Dead Shall Rise V.06", were recorded at Juan "Punchy" Gonzalez' D.O.W. (Diet of Worms) Studios (MORBID ANGEL, CHRISTIAN DEATH), resulting in a more mature, sinister piece of death/grind, fuelled with contempt and a harsh outlook on the status of our present and future world. "Darker Days Ahead" is trademarked byJesse Pintado's and Tony Norman's (MORBID ANGEL, ex-MONSTROSITY) unmistakably feral sounding guitar tone and Pete Sandoval's skin-flaying blast beats. Joined by vocalist Anthony Rezhawk (RESISTANT CULTURE), who renders an outstanding performance, TERRORIZER unleash a brutal tempest predicting the darkest of days.
-official press release, Century Media Records.

The Tragic Loss of Jesse Pintado

Words can't describe the loss we feel for our close brother. We feel deeply honored to have shared the last creative moments with him and are greatly appreciative that the hands of fate allowed him to leave us with a final masterpiece. We promise to sustain his memory loudly in the world of the living. You'll always live on in our hearts Jesse! Thank you to all the fans for sharing your thoughts and offering support. Below are the words of those who were there with him until the end, his family.

It is with great regret to announce the passing of our son, brother, and uncle Jesse. We are deeply saddened by the recent tragedy and would like to thank those of you around the world for your kind thoughts and words. Jesse passed away at Holland's Erasmus MC hospital on Sunday August 27, 2006 due to liver failure.

He was a son, a brother, an uncle and a great friend to us all. He was a free spirit and was loved, adored and admired by many around the world; he loved them. He was a man of integrity and only spoke good words of his friends. Through him, our lives were enriched with different cultures from around the world. Through his music, he touched our hearts and our minds. His physical being has left us but his spirit will live forever in and through us.

Thank you to Mitch, Shane, Danny, and Barney of Napalm Death; to Anthony, Pete, and the Terrorizer family; to the Resistant Culture collective, and his close friend Carlos Reveles. Especially many thanks to all the fans worldwide you truly inspired him. He loved you and was always a brother.

We'd like to send a request to all who have been touched by Jesse's life to please help us raise funds to cover the expenses associated with his passing. If you can help with any amount, please click here to donate or use the link button below.

Terrorizer - Live at the Neurotic Deathfest in Tilburg 2014