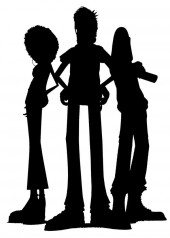 EMBED THIS PLAYER ON YOUR MYSPACE PAGE

Welcome to the dawning of a new wave and craze.

A veil of sadness has fallen over the world, casting a shadow over it's

heart and draining all colour from the Soul. But it doesn't have to be that

way. There is light, love, hope, joy and ecstasy for those who dare. All it

takes is one little taste. Welcome to the dawning of a new wave and craze.'

But first, back to the beginning. Rewind to late-2005 and US nu-soul singer

Rahsaan Patterson is on tour in Australia. Looking to kill time on a day

off, he books a studio. His producer/engineer for the day is one Jarrad

Rahsaan a few things he's been working on.

in," explains Jaz, "and then I played him some crazier stuff I'd been

playing around with, and it was the most crazy ideas he jumped on. Turns out

I was looking and Bammm! It was love at first listen."

"It was always part of my master plan to be in a band," says Rahsaan, who's

a leading candidate for the most laid back man in music. "It's true. And

SugaRush is such a departure from my solo stuff, more upbeat, edgier. It

allows me to keep things interesting and fresh."

"Someone gave me a CD by this Danish singer," says Jaz. "And that was it. I

sent her some tracks, she loved them, we flew to Denmark, went out to dinner and it was like we'd known each other for 10 years. It was a prefect fit in everyway." Ida: "The tracks were just sent from heaven, how could I say no.

It was weird though, the next day we were recording in my living room."

To taste their debut album is to discover a brief history of music that ooses soul, only

turned upside down, twisted, stretched and re-envisaged with a Technicolor®