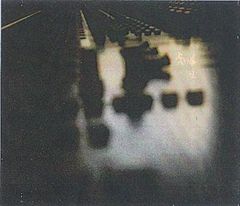 Location:
SEATTLE, Washington, US
Type:
Artist / Band / Musician
Genre:
Other / Ambient / Pop
Site(s):
Site
Label:
the unclear channel
Type:
Indie
BioConnections
Cindytalk
The Universe
Peter James
Robert Pearson
BomberGirl and the Mechanic
DALE LLOYD
Wilts Chamberland
Jacob Powers
D.W.
i am an architect, a musician/recordist and an artist. i've devoted much of my life to exploring and experiencing music across the widest spectrum. so much so that it took way too many years to finally allow myself the opportunity to create my own. in the early nineties i had the good fortune to befriend a musician called dale lloyd- and he was somehow confused into thinking i might be a fitting node in the project he was formulating

which was to become lucid. built on a sense of purposeful naivete, it became a vehicle for

endless playings with sound (and an excuse for quite an accumulation of toys!).

the project was nicely received in some very small corners of press and public. (i was very appreciative that a first review came from (a favorite electronic composer) paul schutze in london's venerable "the wire" magazine, even if he was somewhat puzzled by it!) having lucid under way also sparked interest in reconfiguring another of dale's extant projects "after the flood", enough so that we were able later to work with gordon sharp (cindytalk/this mortal coil, refer to myspace.com/cindytalk, or click on cindytalk in my friends, for some history) both on our second atf release (along with contributions from his name is alive, windy and carl, labradford) and on his then current cindytalk undertakings, and his techno project bambule.

but mainly, aside from being great experiences of their own, they kicked me in the butt to get things underway here myself. there's only so much time in our real world, and i try to spend as much of it as i can making noise. a couple of nearly conceived projects include a collaboration with a singer darcey quinn, which i put in a pile called see also, and was quite excited at what it sounded like it might become; dubious brothers/djschmeejay are the names i put the sampley-beatey and dub stuff under.and am doing lots of ambient and electronic experimentation constantly (noizvendr; soundtracula; among other projects), and with resultant conversations about composing for film and dance under way as well.

a large part of the last 5 or 6 years has been devoted to an attempt at helping my pal tim pollard with his vast collection of great little pop songs (myspace.com/theuniverse).

one of the main current undertakings has been a collaboration with fellow sound artist and all around great guy dan amell, whom has probably poured your beer at the tractor.

Empire Of Sleep -- Under - Live at Darrell's

Empire Of Sleep -- Safer Than Sorry - Live at Darrell's

Empire Of Sleep -- I Know This Road - Live at Darrell's

Empire Of Sleep -- The Speed Of Lies - Live at Darrell's

Empire Of Sleep -- The Shooting Tree - Live at Darrell's

Bambule - Joy Is The Aim
▶ View All Videos