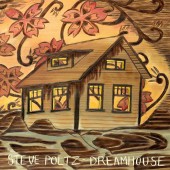 Location:
San Diego, California, US
Type:
Artist / Band / Musician
Genre:
Gospel / Chinese pop / Black Metal
Site(s):
Site
Label:
98 Pounder Records
Type:
Indie
BioConnections
Bob Schneider
Gregory Page
Billy Harvey
Tim Bluhm
Truckee Brothers
Troy Lee Wells
Dennis Borlek
Thirty Tigers
Extreme Touring
He trick-or-treated at Liberace’s house, planned a two-day stay in Amsterdam that ended a month later with him escaping the city under the cover of darkness, and was Bob Hope’s favorite altar boy. Alone, these anecdotes go well with a fistful of peanuts at a cocktail party. But on top of all this, he also co-wrote the longest-running song on the Billboard Top 100 (Jewel’s “You Were Meant for Me”), had a debut solo album that earned three and a half stars in Rolling Stone, and was awarded the title of “San Diego’s Most Influential Artist of the Decade” at the San Diego Music Awards. What you end up with is one of the most engaging, twisted, and prolific songwriters of our time — Steve Poltz. Poltz has cultivated his reminiscences into a heartbreakingly gorgeous collection of songs for his new album, Traveling.

If you’ve been anywhere near a television in the past two months, odds are excellent that you’ve heard the voice of Poltz, whose song “You Remind Me (Who I Am)” is prominently featured in a Jeep television commercial. (The Internet has been flooded with viewers Googling as much information as they can get on the voice behind this contagiously upbeat tune.) And he has released a series of solo albums that have garnered him worldwide notice, with songs prominently featured in TV shows and movies such as Notting Hill. He’s the only artist to have written songs recorded by Jewel and Mojo Nixon . . . and Squeeze’s Glen Tillbrook too.

But Poltz is not just another golden-voiced honey dripper, belting out ballads for tender make-out moments. This is the same Steve Poltz who pioneered punk-folk music as the front man for The Rugburns, the San Diego-based band whose repertoire boasts a thunderous collection of fist-pumping anthems about cannibalism, football, and the peaks and valleys of the Epicurean life. Poltz even released an album called Answering Machine, consisting entirely of 45-second songs that he recorded for his outgoing answering machine message. Fans all over the world have ordered copies faster than they can be printed, and Neil Young himself has remarked that he counts this among his favorite albums.

Poltz has collaborated with an impressive list of renowned musicians through the years, such as Jewel, David Lowery (Cracker), Victoria Williams, and Van Dyke Parks. He was also tapped as the bandleader for The Hugh Thompson Show, a popular talk show that is a centerpiece of the new online AT&T Tech Channel.

With the new CD Traveling, the artist has drifted from the manic, irreverent form that has marked previous efforts and instead created a soundscape of sweet, delicate songs that carry emotions so raw that listeners will relate on an immediate and personal level. As only he can do, Steve manages to balance sparse yet catchy arrangements with subject matter that unflinchingly examines the universal themes of lost love, a lifetime of travel, and the wisdom born from these experiences. This album is the perfect companion to a rainy weekend morning or a warm summer evening, with its soothing blend of guitar, strings, and Steve’s patently warm and smoky voice.

“Haters’ Union” couches anguished, confessional lyrics within an achingly pretty melody, with vocals so rich and so deep that the song takes on a vivid intensity, as if you are immersed in a late night conversation with an old friend. ”Rains” is infectiously punchy, even as Steve describes the hopeless feeling of trying to escape the memory of a lost lover while staring out on a rainy day. “Brief History of My Life,” a massive favorite at live shows, showcases his considerable prowess as both a storyteller and a songwriter, as he takes the listener through a sometimes melancholic, sometimes hilarious walk through his early years, all the way through to the present day. Finally, “Street Fighter’s Face” is an explosive rocker that cuts across all politics and nails the sense of both pride and despair felt by the narrator, a young marine coming to grips with the realities of war.

Traveling is ultimately an album of hope, with melodies that are exquisite in their simplicity. Recorded through 2007, the album additionally features the renowned string quartet Tosca, whose arrangements create a distinct aural tapestry behind Steve’s fluid acoustic patterns.

In addition to the 11 songs on Traveling, Poltz recorded 11 additional tracks that will be included on a separate album called Unraveling, which will be available exclusively at his live shows.

”This album is more a part of my life than any record before it,” says Poltz. “It’s actually a brief history of my life — from an end of a relationship to a new beginning. Writing and getting it made was a long process — three and a half years and 100 songs to be exact, which I edited down to 22 and then to 11. In making this record, I slept on the floor of the studio. It’s all I thought about. And finally, out came what I believe is a little gem of an album.”

Singer/songwriter Steve Poltz stretches for the ethereal to great effect on his grounded disc, Traveling. Gathering together a close knit community of seasoned players - such as Billy Harvey, Jud Nelson, Dony Wynn and Conrad Choucroun - has added to traveling's feel good vibes.

Starting with "I Think She Likes Me," Poltz dives into intricate orchestration, making the mournful tune twist and turn into a humming gem, the type that usually lands in a Wes Anderson film. "Rains" pauses with a Middle Eastern strain running throughout, tapping insistently to a driving rhythm. The shuffling beats surrounding the humorous "What would Ghandi Do?" has less to do with religion than the patience of having to deal with everyday life's challenges.

Steve Poltz taps into universal themes that are readily understood, especially the girl that breaks down to join the "Hater's Union," on his inspired and winning Traveling recording.

Steve Poltz "Wake You Up"

Steve Poltz - I Want My Fuckin House Back