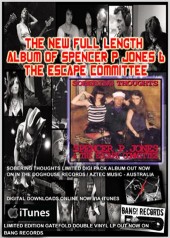 The Brand NEW Full length Album of Spencer P Jones & The Escape Committee "Sobering Thoughts “ will be 2010’s standout Album. this highly anticipated Priority Album for the In the Doghouse Label / Aztec Music will see High Rotations all Around Australia with a Massive Promo Roll out and both National and European Tours.

It is Perfect, Emotional, Melancholic, Gloomy, & is a Beautiful Dark Classic.

Yes, The Time is NOW delved deeper into the world that is Spencer P. Jones.

You can now buy Spencer P. Jones albums with

PAYPAL (visit spookyrecords.com to do so)

SPENCER P JONES - When I Write My Book

Spencer P. Jones and The Nothing Butts - Freak Out