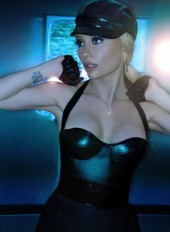 Location:
Los Angeles, California, US
Type:
Artist / Band / Musician
Genre:
Rock / Pop
Site(s):
Site
Label:
Mozarta Muzik
Type:
Indie
BioConnections
Metallica
Nina Simone
Ennio Morricone
Mix Master Gem
For Singer-Songwriter Sonya Kahn, the quote, "Where words fail music speaks" isn't just a quote, it's part of who she is as an artist. A classically trained concert pianist - talent powerhouse utilizes her education and creative wizardry to share her ideas, thoughts and soul through her music.
Sonya Kahn has lived life like someone who has been here three times as long. She started playing the piano by the age of three, singing by five and writing music by the age of six. Her family’s background in music is vast – with her mother an established concert pianist and university professor; her grandmother a singer/actress and radio performer; making three generations of musically gifted women an accomplishment in itself. So it came as no surprise that Sonya was introduced to the joys of classical music at an early age.
It’s been a long road from her first six-year touring gig in Europe at the age of six, with the group SUNSHINE. Back then Sonya was a multi-talented child prodigy touring, recording, performing as a lead vocalist on three albums, while being a full-time student at a prestigious European music academy. “I was just a kid,” she remembers. “But I loved the idea of being on stage and singing in front of thousands of people. It was me first taste of success.”
While continuing to further her education with occasional trips back to Europe she finally landed in the melting pot, of the number two radio and television music market of Los Angeles, where some breaks came her way with her song, “Don’t Go Away” appearing on the horror film soundtrack of “The Thirst.”
Her 2009 new break-out single, “Lonely Road’ from her classically inspired, soulful and rock-a-phonic CD, NEW BEGINNING, was her second music video from the album.
This beautiful music maverick is a force to be reckoned with. Her dynamic professionalism, talent and individuality certainly put her head and shoulders above the rest.

Sonya Kahn - If I Could