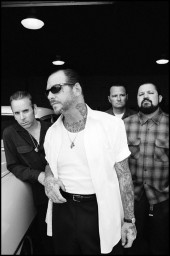 In the late 1970s the first raw, sloppy, speeding guitar chords began to blare from the garages and backrooms of a Southern California suburb called Orange County. They echoed a sound forged in the preceding years in the seminal punk undergrounds of New York City and London.

In 1979, 17-year old Mike Ness formed Social Distortion with drummer Casey Royer and brothers Rikk and Frank Agnew. The band’s world centered around Mike’s one-bedroom pad, dubbed “the black hole” (later immortalized by the The Adolescents with the song “Kids Of The Black Hole”), in a nondescript Fullerton, CA apartment complex. After meeting Dennis Danell, whose brother worked in West Hollywood at The Starwood, (a club instrumental in the careers of Black Flag, The Germs, The Go-Gos and many more) Ness insisted Danell, who at the time didn’t play an instrument, join the band on bass. Royer and the Agnew’s soon split from the band and eventually formed The Adolescents.

Local Los Angeles KROQ-FM deejay Rodney Bingenheimer embraced Orange County music, playing many bands from the scene on his Sunday night radio show. In 1981, Social Distortion released their first single, “Mainliner/Playpen,” on the Posh Boy label. Around the same time, Mike Ness developed a reputation as a brawler resulting in a chunk of his left ear being bitten off during a confrontation at the Cuckoo’s Nest bar.

In 1982 Social Distortion embarked on their first cross-continental tour in a run down old school bus. Joined by LA’s Youth Brigade and DC’s Minor Threat, the tour became the subject of the now legendary documentary “Another State of Mind.” Much madness ensued, due in no small part to Ness’s growing heroin habit. By late 1983, Social Distortion’s line up consisted of Mike Ness, Danell (now on rhythm guitar), bassist Brent Liles, and drummer Derek O’Brien. Their debut album Mommy’s Little Monster was released on the 13th Floor label and gained the band a national name in punk circles. By this point Ness’s heroin use had become a full-fledged addiction and resulted in Brent Liles and Derek O’Brien bailing out of the band in the middle of a New Year’s Eve 1983 show.

After their departure Ness and Danell recruited John Maurer, another old school buddy from Fullerton to play bass and Christopher Reece, of the San Francisco band The Lewd, to play drums. This lineup weathered Social Distortion’s toughest years, as Ness struggled with addiction and the resulting series of jailings and detoxes. Somehow Ness is continued writing and managed to hold the band together.

In 1985 they to began work on a new album. It took a while to complete, but in 1988, Social Distortion emerged with Prison Bound, an album whose moving title track about a wasted life is one of the greatest songs ever to come out of Orange County. From this point Ness turned Social Distortion’s albums into an ongoing dialogue about impulsiveness, its consequences and the hard struggle to overcome.

In addition to the early punk of The Ramones and The Clash, the band’s sound was culled equally from Ness’ love of roots music, specifically early country music greats like Hank Williams and the early blues recordings of the South such as Muddy Waters, Lightnin’ Hopkins and Howlin’ Wolf. As Ness would later declare to Social Distortion audiences, “Without good black music, there would be no good white music.” The self-titled album Social Distortion followed in 1990. It marked SD’s first release on a major label. The success of singles “Story Of My Life” and “Ball And Chain,” along with their remarkable cover of Johnny Cash’s “Ring Of Fire,” make the album Social Distortion’s first Gold record. The band is asked to join Neil Young on tour, beginning the process of bending punk expectation. In 1992 they released another new album, Somewhere Between Heaven and Hell. Lead by the blistering single “Bad Luck,” this album also goes Gold. Following the success of “Bad Luck” at radio, Social Distortion embarked on a co-headline tour with The Ramones.

The band took an extended hiatus following the release of Somewhere Between Heaven and Hell, and did not return to the studio until the fall of 1995. Earlier that year, Time Bomb Recordings re-issued Mommy’s Little Monster, Prison Bound, and released the singles compilation Mainliner (Wreckage From The Past).

In 1996 Social D returned with a new album, White Light White Heat White Trash. The lineup features a new drummer, Chuck Biscuits of Black Flag and D.O.A. fame. The album is a success atop radio favorites “I Was Wrong” and “When The Angels Sing.” The band sign up as one of the main draws of the 1997 Warped Tour and then record and release the live album Live At The Roxy in 1998. Cheating At Solitaire, Ness’s first solo recording was released by Mike Ness in 1999.

The album is an homage to the classic country, blues, rockabilly, and folk that shaped him as a songwriter. Later that same year Ness released Under The Influences, a collection of cover tunes further showcasing his love of American roots music with songs written by legends Hank Williams, Marty Robbins, and Carl Perkins among others. On February 29, 2000, then 38-year old guitarist Dennis Danell died suddenly of heart failure. At the time Mike said “I am saddened beyond any possible form of expression. Dennis and I have been friends since boyhood, starting Social Distortion while we where in high school.”

No stranger to adversity, Ness decided to continue with the band and in the Fall of 2000, Jonny “2 Bags” Wickersham (guitar) and Charlie Quintana (drums) joined Social Distortion. However it’s not until 2003 that this version of Social Distortion head into the studio to record a new album – the first full-length studio record in 7 years for the band that Ness formed as a 17-year old, and the first record without Dennis Danell. The result is Sex Love and Rock ‘n’ Roll. Upon the album’s completion SD’s longtime bassist John Maurer decided to leave the band. He is replaced by Brent Harding, a member of Ness’s solo touring band. The new album is well received nationwide, bolstered by the success of the single “Reach For The Sky.” Also released in 2004, a live DVD, Live in The Orange County, as well as the re-release of Another State of Mind, on DVD. In 2005, the band sells out a record six nights at The Wiltern Theater in Los Angeles.

Social Distortion released Greatest Hits on June 26, 2007, their first-ever career spanning collection. The single “Far Behind” was recorded specifically for this compilation. In November 2007 the band embarked on another wildly successful West Coast concert tour, playing 44 sellouts, with more than 50,000 tickets sold. Throughout 2008, Social Distortion took a hiatus and Ness got his solo band together for national touring. After ten amazing years behind the drum kit for Social Distortion, Charlie “Chalo” Quintana announced in April 2009 that he’s moving on to explore other musical opportunities.

Charlie had this to say about his departure, “Playing with Social D for ten years was a good time in my life. I was lucky to play on two Social D records and the second solo album, and I am proud to have been part of the band. We hit some spectacular heights which I will never forget – adios amigos!” Filling Charlie’s big shoes is none other than Atom Willard. You’ve probably seen Atom wailing on the skins with Rocket From The Crypt, The Offspring, or his most recent band Angels & Airwaves. We couldn’t be more thrilled to welcome such a great talent and individual into the band. Social Distortion is currently writing with plans to record a new Social Distortion album, due for release sometime in 2010.

Social Distortion - Up Around The Bend (Lyrics)