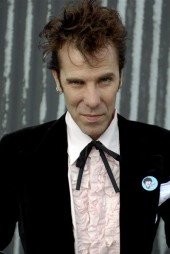 Slim Jim Phantom has secured his place as a true rock n roll icon. As the legendary drummer for the Stray Cats, Phantom alongside band mates Brian Setzer and Lee Rocker, spearheaded the neo-rockabilly movement of the early 80s. With a love for 50s rock n roll the Stray Cats took inspiration from the bygone era and mixed with their youthful energy and aggression produced the updated hard-edged rockabilly sound that saw them conquer London, Europe and later the US, gaining fans among the likes of Keith Richards, Mick Jagger and Robert Plant along the way.

Born in the Brooklyn Borough of New York City, Jim grew up listening to his parents’ jazz records and by the age of ten took up the drums. “To be honest I think the drums chose me, I can’t remember ever wanting to do anything else.” remembers Phantom. Immersing himself in the art of drumming and the world of music, Jim took lessons with Mousie Alexander (who played with Benny Goodman) which included the study of jazz and working through books by Jim Chapin and Ted Reed.

By the late 70s Jim was playing in bands with school friend and bassist Lee Rocker and they soon joined forces with guitarist Brian Setzer. The rest as they say is history. During downtime from the Stray Cats Jim has worked with some of the world’s top artists and has played a part in many successful groups notably “Phantom, Rocker and Slick” featuring guitarist Earl Slick which produced two popular albums and “The Swing Cats” featuring guitar ace Danny B Harvey. Jim also enjoyed a stint playing with The Killer, rock n roll originator, Jerry Lee Lewis.

Over 25 years and millions of record sales later and Slim Jim Phantom continues to inspire and excite audiences worldwide. With a sound, style and image that remains as fresh today as it ever was Phantom has cemented his place among rock royalty. Considered by many as the coolest drummer in rock n roll, Phantom’s influence is still clearly felt on today’s music scene with countless rockabilly drummers imitating his pioneering stand-up style.

Between tours Jim can often be found jamming with friends at the world famous “Cat Club” on Hollywood’s Sunset Strip, a nightclub that he owns and runs.

Summer 2008 saw Jim and the Stray Cats return for an extensive tour of Europe. In February 2009 the band head to Australia and New Zealand for the first time in 18 years - a tour eagerly anticipated by Australasian fans.

Jim also divides his time between his own explosive self-named roots-rock trio and “The Head Cat” starring Motorhead’s Lemmy Kilmister and Danny B Harvey. The latter is set to release a new record in 2009 and tours are likely for both bands.

In addition 2009 will see the launch of Slim Jim’s newest musical project “The Forgotten Saints”, a band co-founded with old friends, and former “Dead Men Walking” bandmates, Captain Sensible (The Damned) and Mike Peters (The Alarm). A changing guest role for a fourth band member will complete and add an exciting dimension to an already prodigious line-up. An album of original material penned by the band will be released in 2009 and “The Forgotten Saints” look forward to hitting the road as and when their respective schedules permit.

Slim Jim Phantom With The Houndogs - Built For Speed