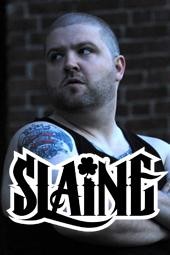 Location:
Massachusetts, US
Type:
Artist / Band / Musician
Genre:
Hip Hop / Hardcore / Rap
Label:
CommonWealth Records
Type:
Indie
BioConnections
Cypress Hill
Necro
Ill Bill
La Coka Nostra
DJ Premier
Madball
Sick Jacken
CommonWealth Records
Sabac Red
DJ Lethal
Q-UNIQUE
Special Teamz
DRE ROBINSON
Big Left
Edo. G
Leedz Edutainment
Peter Parker
DJ JayCeeOh
Skinny Cavallos
Special Teamz / Jaysaun
DAMIANBURNZ
Matty Trump
XL
If you believe Life is hard yet one of the best gifts anyone can be granted, you'll understand the journey of Slaine. The hard knocks and struggle of this Boston native may sound like good tidbits for a novel, television or mini-series. Hailing from the Dorchester area with deep connections in South Boston, Slaine's life was patterned somewhat of a gypsy moving around often. Despite not having a normal home foundation, Slaine aspired like other starry eyed kids to become a force in the entertainment industry. Mapping out his plan to obtain his goals, Slaine packed his bags and moved to New York City and enrolled in the School of Visual Arts. After only seven months, an unfortunate altercation between Slaine and a school employee resulted in his expulsion at the school.
The incident was a major setback for Slaine that suspended his dream of becoming a filmmaker. Although dismayed and discouraged, Slaine prevailed over his setback and proceeded towards his pursuit into the entertainment industry via another way…music. His love for hip-hop was discovered at the early age of nine. "I started writing rhymes when I was nine years old, I use to record on my boom box with a pair of headphones plugged into the microphone jack. I felt they were just words on a page because I didn't have an outlet to perform them." Determined and focused, Slaine spent his nights as a club promoter to survive in the hard lonely streets of New York City. At the same time, he began recording and being managed by hip-hop legend MC Shan. While recording a demo in a studio operated by the Lordz of Brooklyn, SLAINE was introduced to Danny Boy O'Connor of House of Pain.
The introduction lead into him being signed to a production deal with DJ Lethal of House of Pain which led to the mix tape release 'The White Man is the Devil: Volume 1' and the formation of Special Teamz with Boston rap legends Edo G and Jaysaun. Special Teamz dropped a self-titled street CD after that, which garnered critical acclaim and allowed the group to tour in Europe. In a very short time, SLAINE had gone from living in poverty with a drug habit to traveling the world and working with hip-hop icons such as DJ Premier, Ill Bill, House of Pain, Cypress Hill, The Alchemist, and a host of other talented artists. He also became part of the collective LA COKA NOSTRA, alongside Ill Bill and all three members of House of Pain - Everlast, DJ Lethal, and Danny Boy. La Coka Nostra's debut album, "A Brand You Can Trust" debuted at #84 on the Billboard Top 200 and #6 on the Rap charts, sending a message to the masses that the group's brand of gritty hip-hop was exactly what fans of the genre had been waiting for.
Slaine's name continued to grow far past his hometown of Boston due to the exposure he has received in publications such as The Source, XXL, The New York Times, The Boston Herald, and has performed sold out shows across the globe. SLAINE has been nominated for a Boston Music Award and received 4 trophies at The Mass Industry Committee's hip-hop awards including one for Best Lyricist.
As his music career expanded, a personal battle with drugs became a focal point that reared its ugly head. After overdoses, hospital visits and a whirlwind of drugs and violence, SLAINE finally checked into rehab. Instantly, he found himself with homeless drug addicts and realized he was no different than any of them. "Everybody had a story to tell. That was where the idea and the hunger for "The White Man is the Devil" was born. "The White Man" is a cocaine reference, not a declaration of self hate."

Since conquering his addiction, Slaine's was presented with new and exciting possibilities…Acting. A chance of a lifetime presented itself through an unexpected ally, hometown hero and Academy Award winner Ben Affleck. SLAINE made his acting debut with his portrayal of Bubba Rogowski in Affleck's return to screenwriting and directorial debut "Gone Baby Gone". The film was critically acclaimed and led to Slaine being offered a larger role as a bank robber in the blockbuster "The Town" featuring Ben Affleck, Jeremy Renner (The Hurt Locker), and Jon Hamm (Mad Men). He is also been in films, "The Crack Down" and "Bad Blood" and in the upcoming movie "Cogan's Trade" with Brad Pitt, Ray Liotta and James Gandolfini.
While Slaine's acting career has allowed him to blaze new paths, his venomous lyrical attack burns hotter than ever on his debut solo album, "A World With No Skies 2.0", which drops on August 16th , 2011 through Suburban Noize Records. With hard hitting lyrical content, and vicious delivery, "A World with No Skies 2.0" instantly takes hip-hop back to its grimy roots on the streets. To execute his dark musical vision, Slaine enlisted the help of his La Coka Nostra brothers Everlast and ILL BILL, as well as Cypress Hill's B-Real and Vinnie Paz of Jedi Mind Tricks to create a dark hip-hop album that hits squarely in the jaw. "Even though I started my career as a solo artist by hustling my 'The White Man is the Devil' mixtapes, I think people are more familiar with me from Special Teamz and La Coka Nostra," commented Slaine. "With this album I set out to create a soundscape that brings you into my world as an individual which is a bad place to be. It is hard, dark and aggressive from the beats to the lyrics, and a deeply personal trip through my life and the things that made me who I am today. A 'World with No Skies' is a look into my psyche and a vision of my dreams, nightmares, and realities."
Despite his ups and downs throughout his career, Slaine's living his life to the fullest. "I love making music that means something to me, I am grateful for all the experiences that I have had—good and bad. I am lucky to be alive, but my past also made me who I am today."