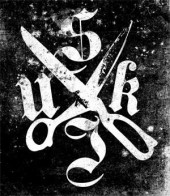 NEMESIS TO GO — I think someone must've bottled pure Essence Of New York Dolls, and London rock reprobates Skintight Jaguars have been swigging it down by the gallon. Fast, freaked-out rock 'n' roll is the name of the game here, and if you're waiting for the ballad, you'll be hanging around for a mighty long time, buster. Everything here is played at escape velocity, encrusted with snot and attitude, and you can bet the amps are on eleven.

DEVOLUTION MAGAZINE — Seemingly on a mission to play harder, faster and louder than anything you've heard before.

THE CUTTING EDGE — The eleven tracks that make up The Curse are rapid-fire wind-ups that will obliterate anything in their wake.

POWERPLAY MAGAZINE — Recorded, mixed and mastered in just four days, the intensity of this brief studio stint, which yielded one damaged voice and two broken amps, is apparent throughout the twenty-five minutes of Skintight Jaguars' debut album, The Curse. The songs launch out of the starting blocks with little regard for anyone or anything that might be in their way. You get the feeling that twenty-four hours spent with these guys would leave you dead or at least seriously injured.

Kevin & the Jaguars - Over and Over (featuring Max Haskett)

Kevin & the Jaguars - It's Not What She Says