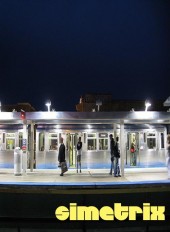 In his early days, Simetrix was drawn to the pulse of the electronic beat of Breakdance Music, and the earliest Evolution of House Music.

Simetrix began producing with other local Chicago-Based Artists beginning in the Mid 1980's in the renowned Hare Bear Studios, Chicago, and in 1988, had a 12 inch Vinyl Release On Razor Records, Chicago, Entitled "Get Down Boy", Which is still available for purchase online under the Pseudonym "Bad Boy Rob".

He now has established himself as a Solo Artist/Producer, currently running his own studio "Spark Studios", located in Chicago, USA.

In the present, Simetrix is very soon preparing to release his large catalogue of material on Dance-Specific Download Stores Worldwide.