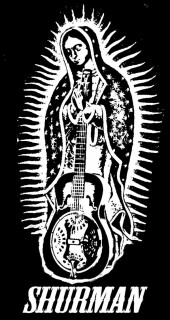 The foursome's latest offering for Sustain/Universal Republic, Still Waiting for the Sunset, is a smoking 12-song tour de force that blends the best of heartland rock with an enthusiastic nod to the rebels and hell-raisers of Country music's past. The record blasts off with a propulsive kick of barroom existentialism on "Is It True" and wraps up with the blistering twang and statement of musical purpose of "Three Chords." In between one finds everything that a fan of real American music holds dear: songs about life and death, love lost and found, noble and shady characters, and places both familiar and otherwise that speak from the heart with sincerity and conviction. Music that is so intoxicating and potent that it can lift a weary soul as well as drown the deepest of sorrows. In short, it's the best elements of what rock'n'roll and country used to be, driven by the impassioned vocals of singer, songwriter, and guitarist, Aaron Beavers.

Co-produced by Beavers and Danny White, Still Waiting for the Sunset was tracked at Nashville's 16 Ton Studios and Austin's Premium Recording. Joining the band on the sessions are such Americana luminaries as steel guitar legend Al Perkins (known for his work with The Rolling Stones, Bob Dylan, The Eagles, Gram Parsons and a host of others), Grammy-winning artist Robert Reynolds of The Mavericks, rising Memphis soul singing sensation Susan Marshall on background vocals, and former Wilco/Uncle Tupelo drummer Ken Coomer on percussion.

At the heart of Shurman is the songwriting and voice of Beavers, who founded the band in Los Angeles in 2001. Since then, Shurman have built a dedicated grassroots following over the course of three self-released EPs, a live offering recorded in LA and Arizona, and what Amazon.com calls their "exuberant full-length debut," titled Jubilee on Vanguard Records in 2005. Recently Aaron and the band returned to his native state of Texas from the West Coast to better accommodate a busy touring schedule that includes up to 200 shows a year. Now with Still Waiting for the Sunset and a dream team of such killer players as bassist Mike Therieau, lead guitarist Jesse Duke, and drummer Nick Amoroso behind Beavers, the group stands ready to fulfill All Music Guide's prediction that its "songwriting and synchronicity will carve out a distinct place for the band on the contemporary music scene."

Along the way Shurman has been declared "L.A.'s undisputed favorite" by The Los Angeles Times in an article on the city's burgeoning country-rock revival. CMT has touted the group in a half-hour Close-Up feature program and used its song "I Got U Babe (Pt. 3)" as theme music for the channel and in promo commercials for its 2006 CMT Music Awards. House of Blues recognized Shurman with its annual "One To Watch" program that previously helped usher such acts as Kanye West, Linkin Park, Coldplay, Radiohead, Gavin DeGraw, Travis and other notables to stardom.

Beavers was all but born, if not fated, to lead this mission to bring country-rock into the forefront and back to prominence. The son of a musician turned pilot young Aaron was captured in a family video at barely a year old completely transfixed by his uncle playing guitar amidst a lively family Christmas celebration. His uncles worked at a busy Country Music Venue in Dallas called Belle Star that hosted all the big country music acts of the day, "One of my favorite memories of that venue was in the early 80's when my uncle convinced Alabama to do a private show for my grandma and granddad on their anniversary," says Beavers. Growing up in a large musical family enabled him to build a foundation for what would become Shurman's trademark sound borrowing from Classic Rock like the Beatles, Rolling Stones, and ZZ Top as well as Sly & The Family Stone and 1960s soul mixed with country music from legends like Willie Nelson, Waylon Jennings, Merle Haggard, and Johnny Cash.

After his family moved to the Atlanta, Georgia area in his teens, Beavers formed a punk band called Frayed Endz with friend and drummer Damon Allen. It wasn't until he hit college at Arizona State University that his rock and country roots began to resonate when he starting playing as a duo with noted Americana singer-songwriter Josh Rouse. It was Rouse who urged Beavers to accompany him to see an unknown band from Missouri playing on a Tuesday night at a local club in Phoenix called Uncle Tupelo. Aaron came home from that show and immediately started the band Shut Eye Smile, a popular live attraction within a vibrant Arizona scene that included The Meat Puppets and Gin Blossoms. Post-college travels took Beavers through the mountains of Colorado and then off to Maui, where he learned to surf and wrote some 100 songs before landing in Los Angeles and reuniting with Allen to start Shurman.

Over the last 8 years the band has built a "reputation as a live powerhouse" (Amazon.com) that has scorched its music into the hearts and minds of a mushrooming group of followers that is poised to hit critical mass. Along the way they've also garnered reams of press raves and reviews while being championed by such rock'n'roll advocates as Mike Campbell of Tom Petty and the Heartbreakers, Ted Nugent and John Popper of Blues Traveler.

Through the years the Shurman line-up has changed and coalesced into a solid dream team of talented, dedicated and like-minded musicians. Lead guitarist Jesse Duke hails from Minneapolis, and is a resource for Austin's Fulton-Webb Amplifiers where he designs and builds some of the finest classic-style tube guitar amps on the planet. Californian Nick Amoroso came in following Allen's departure on drums, and bassist Mike Therieau recently completed the foursome relocating from Northern California to Austin, TX.

"It's like a whole new chapter for me and I feel this is the best combination of musicians I have found yet"" says Beavers of the group today as it soars into its ninth year. Making music that melds "the energy of alternative rock with the sensibility of alternative country" (Tucson Weekly), Shurman has evoked comparisons to such monumental bands as Tom Petty & The Heartbreakers, The Clash, and even The Rolling Stones. As the Phoenix New Times declares, "I defy anyone not to love this band."

SHURMAN's East Side of Love EPK

Bob Woodruff & Shurman "Out of the blue"
▶ View All Videos