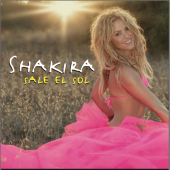 Location:
Barranquilla, Atlántico, Co
Type:
Artist / Band / Musician
Genre:
Latin / Pop / Spanish pop
Site(s):
Site
Label:
Epic
Type:
Major
BioConnections
HeavyGrinder
Epic Records
Menudo
Cedric Edgel
"This album represents exactly the way I am—my state of mind today, as an artist and as a woman," says Shakira. "Some of the songs remind me of my beginnings, so it’s kind of like going back to where everything started, but from a new perspective, with the way I see things now." On her ninth album, Sale El Sol/The Sun Comes Out, one of the few truly global superstars of our time continues her creative journey by looking both forward and back. The disc comes on the heels of Shakira's worldwide smash "Waka Waka," the theme song for the 2010 FIFA World Cup, which turned into a global phenomenon. It's also the next chapter after 2009's critically-acclaimed, dance-oriented She Wolf, which was the long-awaited follow-up to 2005's groundbreaking one-two punch comprised of Fijacion Oral, Volume 1 and Oral Fixation, Volume 2—a pair of albums which combined to sell over 12 million copies worldwide and secured the young Colombian-born singer's place among pop music royalty.
Sale El Sol marks a return to the eclectic approach that defined Shakira's music and established her unique sound and style. "This album has three directions," she explains. "There's the romantic direction, which I hadn’t tapped into for the past three years, but it suddenly came to me and I couldn’t hold it back. So it’s got songs that are very intense, very romantic. Then there are songs that are very rock and roll. I started my career as a rock artist and then I kind of crossed over into pop, so it’s been fun to re-encounter that side of my artistic personality".
"And then there’s the Latino, tropical side of the album," she continues. "I grew up listening to merengue—that was a big part of my life, and I was missing it. I went to the Dominican Republic, the source of merengue, and I started working with El Cata and producing songs like 'Loca' and 'Rabiosa' in this tiny studio in the middle of nowhere. It wasn’t planned, I was just following my instincts. So this album is very genuine, and very personal as well."
A similar spontaneity led to the video for Shakira's new single “Loca,” which features UK star Dizzee Rascal and Dominican artist El Cata (on the English and Spanish versions, respectively). At the last minute, she scrapped plans for a studio shoot and took to the streets of Barcelona with a handheld camera. "The spirit of song is all about freedom, being yourself and not holding back," she says.
This sense of artistic exploration is no surprise coming from a woman who began writing songs at the age of eight; learned to speak English by studying the work of Bob Dylan, Leonard Cohen, and Walt Whitman; and took history classes at UCLA during her break between albums. The compassionate side of Shakira is most obvious in the remarkable work of her Pies Descalzos (Barefoot) Foundation, which she started at the age of 18 and has now opened its sixth school. The foundation currently provides education and nutrition to over six thousand impoverished children in Colombia and is expanding its work to other countries, including newly launched projects in Haiti and South Africa.
"We shouldn’t think of this as charity” she has said. “Every child has talent to be developed and the potential to become a productive member of society. Education is a powerful tool to unlock those talents—and to break the cycle of poverty that too often traps them.” Shakira has also become a leading advocate for universal education, speaking to world leaders on the topic and advocating policy change to governments around the world.
Over the course of her career, Grammy winner Shakira has sold close to fifty million albums. Her collaborations with such stars as Beyonce and Alejandro Sanz have helped keep her audience expanding continually. She is the only artist from South America to have a Number One song in the US, and her performance was a highlight of the 2009 concert celebrating President Obama's inauguration. She has four of the twenty top-selling hits of the decade, more than any other artist—including 2006's unforgettable "Hips Don't Lie," the biggest-selling single of the 21st Century, which reached the Number One spot in an astonishing 55 countries.
“Waka Waka (This Time for Africa),” along with its Spanish language version, "Waka Waka (Esto es África)," was yet another worldwide sensation. It sold over two million singles, making it the biggest World Cup song ever released. The official video has seen over 200 million YouTube hits, making it the Number Four most watched video of all time and the Number Three most watched music video. Including unofficial "Waka Waka" videos, the total cumulative views are over 400 million. The track was also the soundtrack to Shakira's 1Goal campaign for universal education.
The response to the song revitalized Shakira, and inspired both the direction of Sale El Sol and the plans for her recently launched world tour. "When I flew to South Africa, I never received so many hugs and kisses," she says. "In the airport, all the immigration officers were dancing the 'Waka Waka' dance! I was already missing the contact with fans, and that showed me the path so I could finish the album with all my energy and joy."
For Shakira, the title of the new album provides the key to her current outlook. "I was a little bit down at the end of last year, but as soon as this year started, the sun started shining for me," she says. "I find myself smiling more often, I feel more free and liberated.
"You go through difficult moments, everybody does, but there’s always the sun inside of us that never extinguishes, and it has come out for me. And, hopefully, it will be a long day in the sun."