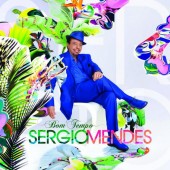 Sergio Mendes, “it’s a new musical adventure.” Over the course of a career that

has amassed an astounding track record of 35-plus albums made and millions sold,

Mendes has embarked on many adventures, highlighted by his early ‘60s Bossa Rio

Sextet outings in Brazil, his worldwide breakthrough Brasil’66 group (and its

many iterations), his 1992 Grammy-winning milestone Brasileiro and his brilliant

For his follow-up to 2008’s Encanto, another “enchanted celebration” of the

Brazilian songbook, Mendes returns with his refreshing and invigorating new

percussion is exciting, the harmony-laced singing exhilarates, and the

arrangements exude both celebration and romance. “This is bom tempo music, good

Portuguese title. “It’s all about the good times, good weather, good tempos. The

album is about the diversity, joy and sensuality of Brazilian music—songs I

from his old friend Stevie Wonder, written especially for Mendes in 1977, the

appreciate Brazilian music” he says. “I wanted to create a collection of songs

that are mostly up-tempo, fresh and danceable, so that young people can relate

to. I wanted to reintroduce great Brazilian melodies in a different way and

communicate with a new audience.” Case in point: the Benjor Brazilian hit song,

“Pais Tropical,” with a rap interlude.

songwriter-arranger-vocalist Carlinhos Brown, who was integral to the success of

the Brasileiro album), newcomers are also in the mix.

Most prominent is Milton Nascimento, who contributes his own “Caxanga,” a

moody, mysterious children’s song that he had only recorded once. He sings the

lead vocal in his singular style and plays the acoustic guitar. “This is very

special,” says Mendes. “Even though we are more or less contemporaries, this is

the first time we’ve worked together. Milton is one of my favorite Brazilian

singer/composers, no doubt about it. Coincidentally, I went to a show Milton

performed in Los Angeles, and we went out to dinner afterwards. I told him about

the new record and how I’d love to have him be a part of it. The next day, he

called me up and said, ‘Sergio, I have a surprise for you.’ He brought this song

in and it worked out perfectly.”

Seu Jorge is one of the most promising, hot, new Brazilian singers (American

Life Aquatic with Steve Zissou”). “It has always been my pleasure to introduce

new Brazilian talent in my albums, and we do have so many gifted artists in

Brazil. Seu Jorge’s participation brings the kind of freshness which has always

been associated with my projects.”

There are important new faces in Mendes’ Bom Tempo. One of them is horn

player Scott Mayo, who not only plays saxophones and woodwinds instruments, but

also arranged the horn section for the tracks. “He brought tremendous energy to

the project. He also invited some of his friends, including trombonist Andrew

Lippman, and trumpeter Bill Churchville - they add so much color to the songs.”

Majdecki. “He has been doing lead sheets for me for a long time, but this is the

first time he has actually played with me – what a joy to work with him.”

In addition, Mendes introduces to the party young and talented singers Katie

Hampton (who has been in Mendes’ band for the last 2 years) and Nayanna Holley,

Bom Tempo opens with a spirited, chant-like take on the Gil/Donato

a funky rap that pays tribute to Brazil’s songwriters. In the Afro-Brazilian mix

are allusions to such Mendes’ hits as “Mas Que Nada” and “The Frog.”

The second track, another dance-oriented jewel, “Maracatu Atomico,” was a

based on the Afro-Brazilian maracatu rhythm.

Another song on the CD with the rhythm, “Maracatu (Nation of Love)” is a

and luminous horns. At the close of the song, in the fade, there is a duet by

bassist Alphonso Johnson and Mendes, with scats by Seu Jorge, which Mendes

jokingly calls “30-seconds of ear candy at the end.” This maracatu song was

composed by Moacir Santos, who also penned the romantic tune on the CD, “Orpheus

Moacir, says Mendes, was one of his mentors. “He lived in Rio and worked at

the National Radio, “stated Mendes. “He always had a special way of writing and

orchestrating. He had his own style. I took music lessons from him when I was

17, and he wrote some of the arrangements on my first Bossa Rio Sextet album,

along with Antonio Carlos Jobim. He was one of the most prolific

On Bom Tempo, there are new interpretations of some Brazilian classics,

including a fresh spin on “Ye-Me-Le”, with a cool rap performed by new band

“Carlinhos was in Los Angeles for two weeks, so we decided to work on a new,

special version of the song he wrote. I said, let’s do a 2010 version that not

this year. Because those soccer games will be played in Cape Town, South Africa,

I had the idea of using some Zulu words as part of the song.”

brand-new Brown composition, the grooved, romantic “You and I,” sung in English

by the songwriter and Holley; and two Jobim gems featuring Leporace: the

soothing “Caminhos Cruzados,” with a cool and minimalist quartet (Mendes,

Johnson, Shapiro and Majdecki) playing in an intimate setting, and “Só Tinha De

Ser Com Voce,” a swinging uptempo piece. “Jobim was another mentor and a dear

friend to me,” says Mendes. “On “So Tinha…” Scott arranged the horns to have an

homeland’s music, which keeps attracting young audiences through the years, all

over the world, Mendes notes “It started with Jobim, being played by Stan Getz

and Charlie Byrd with Astrud and Joao Gilberto; then it was myself with

Jobim, and later David Byrne putting those compilation albums of a variety of

Brazilian musicians playing all kinds of styles. He adds, “More recently (with

Timeless and Encanto) the attraction continues, with will.i.am , John Legend,

India.Arie, Fergie, and so many more, who love the music so much and were

instrumental in helping to expose it to people in their audience. Even for Bom

Tempo, when I met the 20-year-old DJ guys Bimbo Jones in London, they were

totally into watching YouTube videos of Brasil ’66. It just goes to show you