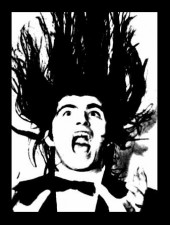 Location:
London and South East, UK
Type:
Artist / Band / Musician
Genre:
Garage / Gothic / Roots Music
Type:
Major
Bio
Before The Sex Pistols and Alice Cooper, even before Monty Python's Flying Circus, there was "Screaming" Lord Sutch. Their raunchous performances of rock and roll standards by Little Richard, Jerry Lee Lewis and Chuck Berry gained them a following in the early 60's. Lord Sutch kept his audience on edge with his stage antics which had included dressing as Jack The Ripper as well as chasing people with axes. During performances of their single Till The Following Night (released in '61 and produced by Joe Meek), Lord Sutch would appear from a coffin >>

With the ever changing line up of The Savages, Lord Sutch released such singles as Jack The Ripper ('63), She's Fallen In Love With A Monster Man and Dracula's Daughter (both released in '64) >>

Disagreeing with British politics for the past thirty plus years, Lord Sutch would often run for office for his unique Monster Raving Loony Party (founded in 1963) which resulted in many comical, sometimes negative brushes with Parliment and Prime Minister Margaret Thatcher (some of Lord Sutch's ideas had leaned toward the comically outragous, from making everyone in court wear wigs and silly clothes - not just the judge, and improving the climate by moving the British Isles five hundred miles south, to the thought provoking - imposing free eye glasses and hearing aids) >>

Lord Sutch was a kind gentlemen and a friend to many, which was why noone could understand the reasoning why he committed suicide by hanging himself at his home in 1999.Even the politicians mourned his death >>

Screaming Lord Sutch and The Savages - Till The Following Night 1961