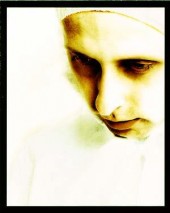 is not usually used for music.he has a good sense of atmosphere.

ways. A true renaissance artist of digital pop culture, from his earliest controversial

work using found mobile phone conversations, through to his focus on trawling

hidden meanings and missed contacts emerge, his restless explorations of the

experimental terrain have won him international admiration from amongst others,

Since 1991 he has been intensely active in sound art, producing concerts,

innovative and inspirational works of contemporary electronic music. He has

Hunt and Peter Sellars, amongst others.

His works continually seek to break new ground: in 1994 he pioneered one of

the first experimental ezines, I/O/D , in 1998 he performed Surface

Noise on a London Bus around the city, in 2000 he performed over 20 KM

of beach in Italy on the public speaker system, re-soundtracked Jean Luc Godard's

just one evening with a series of lookalikes across the globe. In 2003 he became

the first electronic artist to ever perform in Vietnam, and in 2004 his Sound

Surface work was the first ever Tate Modern sound-art commission. From

Among his recently completed works are Europa 25 , a newly commissioned

for The Royal Ballet and Random Dance Company, a string quartet Play Along ,

a collaboration with legendary choreographer Merce Cunningham and creating Flower

Echoes work to open the Guangzhou Triennial in China. In 2006 he presented

a new car horn for the US, and installed a permanent artwork for the Northern

Neuro Disability Services Centre in Newcastle UK. 2007 began with a new commission for choreographer Shobana Jeyasingh’s Faultline and sound design for British horror film ‘Reverb.’ His collaboration with film-maker Steve McQueen, Gravesend, was premiered at the 52nd Venice Biennial. He scored the hit musical comedy Kirikou & Karaba with Wayne McGregor in Lyon and Paris which is touring internationally until 2021. He recently scored the hit musical comedy Kirikou & Karaba, premiered his six-hour show Of Air and Ear at the Royal Opera House in London, and designed the sound for the new Philips Wake-Up Light His avant pop band Githead continues to tour and record globally.

Curtains') and the Raymond Poincaré hospital in Garches France as part

of the bereavement suite (Channel of Flight').

for his installation Wishing Well' in Germany. In 1998 he became Professor

Scanner' at John Moore's University in Liverpool. He is a Contributing Editor

of kultureflash.net, a London centric e-zine which goes out weekly via HTML

Nels Cline demo of The Scanner by Analog Outfitters

A Scanner Darkly - What Does A Scanner See?