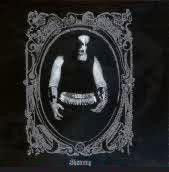 Location:
Lappeenranta, FI
Type:
Artist / Band / Musician
Genre:
Black Metal
Site(s):
Site
Label:
Moribund Records
Type:
Major
BioConnections
Horna
Bahimiron
SARGEIST was born during the summer of diabolical holocaust 1999 as a clandestine solo project of Shatraug. First offering was captured at the Ruins of Cachtice entirely performed by Shatraug himself. In the year 2000 Lord Volos, the ex-drummer of BLUTRACHE, joined Shatraug and the first ritual was re-assembled. Both manifestations were released on Shatraug´s label Warmoon Records in a limited edition of 111 copies. In 2001 SARGEIST was enforced with Gorsedd Marter and Makha Karn, both of them later turning out traitors. With this line-up the "Tyranny Returns" tape LP saw it´s ignition and creation, at the Ruins of Cachtice again, and led everything towards the union assembled of the brotherhood that had formed with Shatraug and Torog. In late 2001 Moribund Cult signed SARGEIST to curse this world with their depression. It was soon to be learned that SARGEIST stand timeless, entering the Heinous Path with full-hearted and soul-woven art.

In 2002 SARGEIST recorded and released the songs "Reaping With Curses & Plague", "The Rebirth of a Cursed Existence" and a re-recording of "Sinister Glow of the Funeral Torches" on a split 7"EP with French terrorists, and label mates, MERRIMACK and two compilations out on Woodcut Records ("Jatkosota" compilation CD) and Black Arts Productions ("And Jesus Wept" compilation tape).

Although the material was ready since 2001 it took until February 2003 that SARGEIST had finished the recordings for their debut CD release "Satanic Black Devotion". With this album we have set up a course returning to misery & comfort.

THIS PAGE IS NOT RUN BY SHATRAUGIT IS A FAN PAGE RUN BY ME.www.myspace.com/frostandhatred