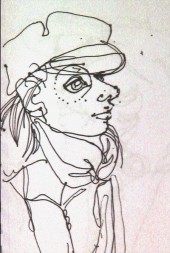 ** ALL tour dates are posted at MYSPACE.COM/THEBOWMANS.**

As many of you know, Sarah and I have been touring like mad for over three years. And we don't like to stop for anything . except this:

We finally recorded our NEW ALBUM! We're thrilled to announce that it has been produced by the acclaimed Malcolm Burn and mastered by Greg Calbi (Dylan MODERN TIMES etc.) We feel very honored to work with Malcolm not only because of his amazing track record with Emmylou Harris, Kaki King, Bob Dylan and more, but because the ALBUM SOUNDS INCREDIBLE!!!!

Claire and I are proud to credit you, our big-hearted supporters. You have encouraged us to keep at it despite the challenge of the touring lifestyle and the ambitious aspiration of trying to make it as full time performing songwriters. You can always help to support our tours and recording projects by coming to the shows, ordering our music online, or even by donating using our donation button on myspace! (See below.)

Yours with lots of love as always,

Donate any amount to The Bowmans 2009 Release by pressing the button below. All transactions are highly secured by Paypal and any information you give will not be made visible to anyone. Checks are accepted. Please make out to The Bowmans Music. Send to: The Bowmans PO Box 6381Ellicott City MD21042

HEAR THE BOWMANS WITH BOB HARRIS ON THE BBC2 THIS MAY!!With harmonies that seem to come from one astonishing voice, The Bowmans share a rare, near telepathic musical bond. The Brooklyn based “roller coaster” duo ranges from poignantly captivating to serendipitously joyful. Their music is concurrently sophisticated and imaginative, blending together the preserved vulnerability and abandoned glee of their childhood. The Bowmans deeply move and delight their audience world wide with uncanny, evocative, and unforgettable performances.

Sweeping across a full range of passions, the cohesive debut album from The Bowmans, Far from Home, (Mother West Records) includes shattering acoustic harmony-rich ballads to heartening rock songs infused with early classical and gospel influences. The duo’s sound has been compared to Gillian Welch, Neil Young and Joni Mitchell, to name a few, but they are impossible to pigeonhole. Sarah and Claire Bowman have the unique intuitive connection common to twins who have performed together since youth, and because of this they are clearly always on the same musical page.

If you want to be on the Bowmans' mailing list, send Claire a note. For BOOKING, email mary@maryjonesmanagement.com

with a distinct subject line. Please do not make booking inquiries on myspace.they are easy to lose track of here. :-)

We're happy to have recently joined Continental Song Records in Europe. We're often on the road, so look for unfolding tour dates on our Myspace calendar.

If you want to be on the Bowmans' mailing list, send Claire a note. For BOOKING, email mary@maryjonesmanagement.com

with a distinct subject line. Please do not make booking inquiries on myspace.they are easy to lose track of here. :-)

We're happy to have recently joined Rounder Records in Europe. We're often on the road, so look for unfolding tour dates on our Myspace calendar.

Sarah Bowman is a classically trained musician who grew up in an environment of singer songwriters and protest folkers due to the convenient combination of her parents’ vastly different musical tastes. She started performing her own songs with her twin sister at the age of 14, and had a regular gig at the local Java Hut in Davenport Iowa during her high school years. Sarah decided to leave her hometown to pursue a career in classical music. She has a bachelors degree in cello performance and a masters certification in vocal and general music education. Sarah performed as a member of the Baltimore Symphony chorus for two seasons under the direction of Yuri Temirkanov, Bobby McFerrin and others. Sarah was inspired to cross over from classical cello playing into the world of indie folk due to her appearance with Scottish songwriting legend Alexi Murdoch in Baltimore in 2002. She then sat in with Baltimore’s hottest funk bands The Octonauts, The Financial Group and recorded with the intricately sophisticated instrumental math rock group Dark Water Transit. ------------------------------------------------------------------------------------------

Sarah is currently performing all over Europe and the US with her own group, The Bowmans and is performing as cellist and singer with the critically accalimed goth rock cello outfit Rasputina. The Bowmans released their first record, Far From Home in 2006 with Mother West Records in NYC. The record was the best selling album on the antifolk.net online store for over six months after its initial release.

PROPHET AND PRODIGAL- Original Song by Sarah and Michael Bowman

Everybody wants to the World (feat.Sarah Bowman)