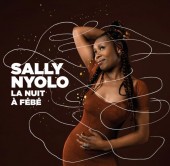 Location:
Fr
Type:
Artist / Band / Musician
Genre:
Roots Music / Afro-beat / Acoustic
Label:
Cantos (France) - Mi5 (USA) - Roughtrade (Germany)
Type:
Indie
BioConnections
Bob Marley
John Butler Trio
George Clinton & Parliament Funkadelic
Patrice Bart Williams
Richard Bona
Tété
David Byrne
Sebastien Tellier
Idan Raichel Project
Tryo
Angelique Kidjo
WATCHA CLAN
TOGUNA
Radio Neo
ARNO
Princess Erika
ZEN ZILA
French Music Export
Désert Rebel
French Music
Femi Abosede
Argile
Cantos
Mi5 Recordings
TALENT SORCIER
Groove! Production
Sally Nyolo (thank you to RFI journalists who wrote part of this biography) Sally Nyolo comes from the South of Cameroon. She was born in the Eton Land in the small village of Eyen-Meyong, near the town of Tala in the Lékié region. She left her homeland at the age of 13 to settle in Paris. Sally built up her professional experience from 1982 to 1994, first as a backing-singer working with numerous French and African artists as Jacques Higelin, Sixun, Nicole Croisille, Touré Kunda, and many others… Sally Nyolo joined the group Zap Mama in 1993 for their world tour and recorded with the group the album "Sabsylma" and two live albums (in Japan and at Montreux). In 1996, Sally Nyolo recorded her first solo album entitled "Tribu" (Tribe), released by the Label Lusafrica. All the tracks - sung in Eton, her native tongue - were written and composed by Sally, except "Tamtam" co-written with Sylvain Marc. In June 97, Sally Nyolo received the RFI Discovery 97 prize awarded by Radio France Internationale. The jury, presided over by drummer Manu Katché, afforded this recognition to the album "Tribu" for its artistic merits, and to Sally Nyolo as one of the most promising hopes of the new generation of African musicians. And Sally Nyolo soon went on to prove that she was more than just a promising hope. Spring 98, Sally returned in studio and started working on her second album entitled "Multiculti". Released in May the same year, Sally's second album doesn't only confirm the young singer's vocal talent, but also reveals a deep passion for "métissage" (musical and cultural fusion), reinventing successfully the mix of traditional African rhythms and modern musical heritage from the 90's. Sally's hot fusion sound scored a major hit with French audience when the young Cameroonian star kicked off her latest tour on May 28th at the legendary "New Morning" in Paris. Between August and September 98, Sally Nyolo focused on her international career, playing series of dates across the United States and Canada (where she had already built up a considerable following of fans). When she returned to Europe, Sally embarked upon an extensive tour of Spain and L'Ile de la Réunion, and then performed a further series of concerts in France. December '98, legendary French pop star Jacques Higelin invited Sally to perform as "special guest star" at his concert at the "Cité de la Musique" in Paris. Sally returned to the music news in January 2000, releasing her third album "Beti" (name of an African tribe). Sally's new album, partly recorded in Cameroon, revolved around "Bikutsi", a traditional rhythm from the forest regions of central Cameroon. Following the release of her album, Sally started touring in spring 2000 : after taking her catchy Bikutsi sound to France, Sally brought the house down in her homeland when she performed at the "Rencontres Musicales" in the Cameroonian capital, Yaoundé (May 1st - May 7th). Sally went on playing in Germany (in May) and Quebec (in July). The singer kept up a hectic tour schedule throughout the summer of 2001, touring France, Spain, Italy, Portugal and Switzerland. The same year, she received a golden disk award (over 100.000 copies) for the song "No Mélène Ziga Nda", written by Sally on a music composed by Michel Aimé for Yannick Noah's album, which includes the famous single "La voix des sages". Sally returned to the studio in 2002 and her fourth album "Zaïone" - name of her son she had had the previous year - was released in October of that year. Broadening her musical horizons, Sally mixed her traditional Bikutsi with other musical styles on this album. "Zaïone" included duos with number of French artists : Nicoletta, Nina Moratto, Muriel Moreno and Jean-Jacques Milteau. Teaming up with her Cameroonian friend Princess Erika, Sally also enjoyed a brief flirtation with reggae on the song "Jah Know", which was chosen as the first single release for this album. End of November 2002, Sally played a series of concerts in Paris at "La Scène". Few months later, the star was hitting the UK in February 2003 for a major tour and followed on with Germany and Switzerland in March before jetting off to Japan, where she played at the Quattro Club in Tokyo during the Francophone Week initiative. Sally returned to her native country in May with concerts in Douala for the Douala Massao International Festival of female singing. Her international career was further boosted in 2004 when she performed in Italy, Belgium and also London at the African Music Festival. The Brazilian singer Martinho da Vila invited her to sing and play a duet on his album "Conexões", and to perform at his concert at the "Olympia" in Paris. In March 2005, she leant a hand to a David Murray production, "Pouchkine", which was performed at the Banlieues Bleues Festival in the Paris region, and will perform again in Italy early 2008. On top of her artist career, Sally Nyolo opened a studio in Yaoundé and set up her own production company named "Tribal Production" with the aim of developing the Cameroon music scene. In June, the first album of Tribal Production was released in Cameroon, untitled "Original n°1". This beautiful album found a worldwide release under the name of "Sally Nyolo & the original bands of Yaoundé – Studio Cameroon" in 2006 (World Music Network) revealing totally unknown but so talented artists.

Mémoire du Monde During the 2005 summer, Sally Nyolo was finishing the production and mastering of her new CD. "Mémoire du Monde" is an electro-acoustic album, light and deep, in which the legendary 6/8 of Bikusti rhythm dives its roots into the language of La Fontaine. Recorded in Cameroon with local musicians, and then in Paris with her own band, the "World's Memory" swings from a language to another (Eton and French), inventing a new way of singing the songs. No doubt we find the purest Bikutsi in this album, but also the exhalations of blues and reggae. The album is entirely written, composed, produced and realized by Sally Nyolo, except the tracks on which Michel Aimé, Marc Etienne and Sylvain Marc collaborated. We can also catch the voice of her former Zap Mama'sister Sylvie Nawasadio, and the Bokué Pygmies.