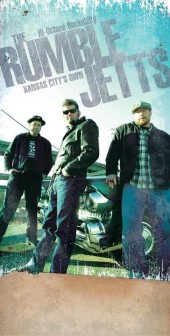 The Rumblejetts got nominated for best live act in the Pitch Music Awards! It's a great honor to announce that the Rumblejetts are now part of the Gretsch guitar family. www.gretsch.com thank you Mr. Fred Gretsch and Mr. Joe Carducci cheers, Doyle Check out our review of "Branded" in this issue of Dynamite, thanks (Frank) "BoppinBlueGene" our pal from across the Pond.

For the past 11 years the Rumblejetts have been spreading the rockabilly gospel. The Rumblejetts have released 2 cd's, both recorded at the legendary Sun studio in Memphis Tennessee. the trio was honored to play the 50th anniversary of rock and roll at Sun studio with Scotty Moore, DJ Fontana, Billy Swan, Sam the Sham, Issac Hayes and several other legendary Sun recording artists. In 2005 the Rumblejetts released "Roostina" and "Cool Down Baby" in 2006. both have had rave reviews by magazines such as Ol' Skool Rodz, Rockabilly magazine, Blue Suede News, Atomic & Classic styles. Rumblejetts albums are sold on amazon, itunes, napster, cd baby, best buy and raucous records. The trio has developed a strong following in the kustom car kulture playing numerous events thru the years for the hot rod enthusiast's. in 2007 the Rumblejetts opened for the Stray Cats!! and in 2003 Dwight Yoakum. also in '07 the Rumblejetts were selected as a finalist on CBS's early show in New York, "Living Room Live". the video "One step away from heartache" appeared numerous times on network television and played live when CBS traveled to Kansas City for the summer in the city tour. In 2006 the band made the top 10 on CMT's studio 330 nationwide contest. The Rumblejetts perform with high energy sets and antics! They have a strong commitment to their music and love performing.

We are in the latest Issue of Full Throttle Magazine, thanks Brown Bag Propaganda!!!

I edited my profile with Thomas Myspace Editor V4.4 (www.strikefile.com/myspace)

The Rumblejetts from Kansas City