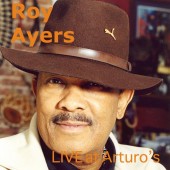 Roy Ayers could very well be the best jazz/R&B artist you don’t know. In his 40-plus years as a vibraphonist, he has produced a string of soul and funk classics, like “We Live In Brooklyn Baby” and “Everybody Loves the Sunshine,” that has arguably made him the second-most sampled musician in hip-hop, after James Brown. You may have heard snippets of his music in songs by 50 Cent protégé Tony Yayo (“Fake Love”) or A Tribe Called Quest (“Bonita Applebum”). But while the exposure of his extensive catalogue is enough to boost any man’s ego, the 68-year-old Ayers remains humble and busy. Just last year, Ayers and Kanye West were enlisted to produce “In the Mood,” a modish jazz cut off Brooklyn MC Talib Kweli’s seminal CD Eardrum, and Ayers continues to tour and work on an album due to drop in 2009, which he says may feature the exhilarating, highly underrated jazz vocalist Dee Dee Bridgewater. Meanwhile, Verve has reissued three of his albums from the 1970s, which highlight some of his best work.

EW caught up with Ayers before his show at New York’s Blue Note Jazz Club, where he joked, laughed, and talked about his top five favorite samples of his work. Check it out after the jump.

Samples Ayers' “Everybody Loves the Sunshine”

AYERS: “Everybody Loves the Sunshine” is probably the most sampled song that I’ve recorded, and Mary J. Blige did a fantastic job on itWhen I went to the studio, she was sitting down, and there were a lot of people in the studio, and my wife went with me, and she jumped up and said, "Mr. Ayers it’s such a pleasure to meet, I’m so glad you could come." She was so humble, extremely humble.it was cool.

Samples “Everybody Loves the Sunshine”

It’s the same song, but he only plays a smidgeon of it, maybe about four or five seconds, but he sampled the interlude, and it goes like this [hums and snaps his fingers]. He just looped it, and it’s very nice and I said, "Why didn’t I think of that?" He made a completely new song out of it.

3. A Tribe Called Quest: “Bonita Applebum,” from 1990’s People’s Instinctive Travels and the Paths of Rhythm

That is classic, what they did with “Daylight.” I actually talked to Pharrell Williams from London. He was on the phone from Virginia and we were talking. Pharrell said that’s what really started his whole career. I felt very proud.

Samples Sylvia Striplin's “You Can't Turn Me Away”

Sylvia Striplin was an artist on my label, and when P. Diddy did that I was like wow, man. It was very hot, and Junior Mafia--that’s one of my favorites.

Samples "The American Promise," which Ayers wrote for the group R.A.M.P.'s debut record, Come Into Knowledge

What Erykah did with “American Promise” was great. She’s a friend. She’s on Universal, and Universal bought the masters from ABC, and they were holding them there, but several people had gotten a copy of the song and started using it, illegally sampling, especially in Europe. They liked the way the group R.A.M.P. did the song. So they were supposed to release the song through my publishing company, which is what eventually happened because my company called them.

Roy Ayers Ubiquity, live at Band on the Wall

Roy Ayers You Send Me