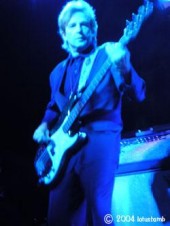 Location:
Los Angeles, California, US
Type:
Artist / Band / Musician
Genre:
Acoustic / Folk Rock / Country
Site(s):
Site
Label:
Telechrome Records
Type:
Indie
BioConnections
Chris Isaak
John Prine
James Wilsey
Farrell Spence
Hershel Yatovitz
Rowland Salley grew up in the Mississippi River Valley area in the State of Illinois. He was introduced to the piano and to music in general by his grandmother. At the age of ten he was playing the French horn and within a few years had switched to bass. Radio broadcasts from Chicago and other Midwestern stations allowed him to hear music ranging from Steven Foster to country, blues and rock and roll, all styles that have found their way into his musical foundation. By the age of sixteen he had taken an interest in simple direct songs and began to write some of his own, an interest which has held forth to the present. His "Killing the Blues" was recorded by John Prine on his "Pink Cadillac" album and also by Shawn Colvin on her "Cover Girl" album. "Killing the Blues" was also voted by Joel Selvin of the San Francisco Chronicle as one of 2005's Top Ten Songs.

Today Rowland is recognized as the long standing bassist with "Chris Isaak and Silvertone". That group shot their Showtime television series "The Chris Isaak Show" for three consecutive seasons in Vancouver, British Columbia. In this environment "off the road", Rowland recorded a dozen original songs on a new record called "Killing the Blues". In addition to singing, he plays bass, guitar, and ukulele on this collection of songs with a classic backing band.

In addition to being a musician, Rowland has drawn and painted all his life. He takes his easel with him when the band is on the road and goes where ever he can to paint as often as he can. "It's like crop rotation when I finally get the chance to paint. There's often plenty to do musically and there always comes a time when it is time to balance one with the other" he says. "Watercolor is the perfect medium for traveling because it dries fast and it's portable."

Rowland's watercolor paintings have been displayed at the Presidio Visitor Center in San Francisco and many have been reproduced as postcards.

Giclee reproductions of the watercolors, the Presidio Postcard set and the "Killing The Blues" cd are for sale through rowlandsalley.com.

If you have a question for Roly to answer, message us and we may feature your question on the website. Be sure to check out his personal blog to read his thoughts.

This profile maintained by lotusbomb for Rowland Salley.