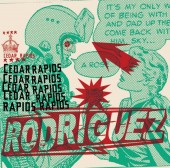 Rawk N Roll influence since the summer of 1999. Being inspired by bands like

The Stooges, New Bomb Turks or Zeke, their songs will serve your ears with

an extra portion of roughness and uncompromising garage energy!

Summer 2001, they released their first 7 inch on a Vienna no-budget label

called Angry-Funghi Records. In spring 2003 they put out their first

directly live in the rehearsal room. Its a low-fi garage bastard with raw

live energy and without any overdubs. Their thirteen killer track debut

album became a lot of positive critics from many important zines.

With three new hard-hitting tunes, the guys hit the streets again with a 7

inch called "Trip Fontaine" and was released on Varmint Records

(Munich/Germany). As time goes by, Rodriguez became a name in the European

Rock-Sub-Scene. After many shows with such great bands like The Deadly

detailed songs, but still keeping nevertheless their Rod-sound. In the

of a 10 inch, which is called Black Finger Tips. Rodriguez eventually toured

with this album in the months of October and November in France. Because the french audience love their music, they repeated a Tour de France in autumn 2006.

I Think of You - Rodriguez