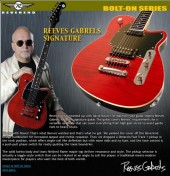 Location:
US
Type:
Artist / Band / Musician
Genre:
Rock / Experimental / Healing & EasyListening
Site(s):
Site
Label:
Favored Nations
Type:
Indie
BioConnections
Nine Inch Nails
David Bowie
Mike Keneally
Mark Plati
Club d'Elf
John X
Jason Davis & the New Philosophers
Richard James & The Special Riders
PROTECTO
Los Duran
Rick Torres
BIG SWEDE STUDIOS
Chris Haskett
Circus Dog Serenade
Reeves Gabrels, a Grammy-nominated guitarist/songwriter/producer best known for both his work with David Bowie and his aggressive guitar style that combines the visceral energy of rock, the harmonic sophistication of jazz, the emotional honesty of blues and country, and an ear for the unusual. A furious cut-and-paster in the studio and an evil genius of atonal improvisation on stage Gabrels explores sonic extremes with a great, adaptive intuition for what each song needs most. He shows that his limitless technical and compositional skills can still shine without restraint. Guitar Player's Editor In Chief, Michael Molenda says. "Gabrels is one of those guitar players that, quite simply, redefine guitar craft a bona fide 21st-century guitar god who deserves massive amounts of Justin Timberlake-style fame." He will go down as one of the true originals in the guitar-hero pantheon, even as his fusion of fretwork and computer processing questions and redefines that instrument's very place in the rock canon. Among those who know him at all, he is either loved or hated but never ignored; this alone guarantees his staying power. You'll be hearing a lot more from him -- whether or not you know it's him you're hearing.
Reeves has also contributed music for film work by famed director David Lynch, and other bands and artists such as The Cure, Nine Inch Nails, Brian Eno, Ozzy Osbourne, The Rolling Stones, Public Enemy and Natalie Imbruglia.

Reeves And The Combover

Reeves Gabrels "Messin' With The Kid" and "Yesterday's Gone" 5/16/13 Louisville,KY
▶ View All Videos