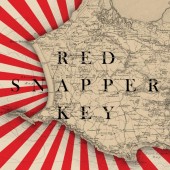 Location:
US
Type:
Artist / Band / Musician
Genre:
Experimental
Site(s):
Site
Label:
Flaw , Warp , Lo , Flameboy
Type:
Indie
BioConnections
George Clinton & Parliament Funkadelic
Curtis Mayfield
Gilles Peterson
Suicide
Moist
A Certain Ratio
bomb the bass
Two Lone Swordsmen
Clayhill
Alpha
TOOB
Melodic
Lo Recordings
Tomas Challenger
RED SNAPPER - KEY
Original line-up: Rich Thair (drums), David Ayers (guitar) and Ali Friend (double bass/vocals), joined by Tom Challenger (sax, clarinet and melodica). Guest vocalists: Eliza Carthy and Gavin Clark.
'Key' is a guide to all things 'Snapper', ghostly sonic landscapes, ripping machine gun rhythms and bone shaking bass.
Two years in the making, from a band who met nearly 20 years ago, this is 'Key': a sonic journey through afrobilly funk, grinding dub jazz and future blues bophop, full of dark soul and blistering passion.
"Key" is the seventh and arguably the best album from a genre-defying group that continue to break boundaries and create new sounds while staying true to their unique energy that fans have always loved.
And those fans are many; loyal since the moment Red Snapper formed in 1994.
Snapper have been drilling their way out of pigeonholes ever since, with four albums on Warp Records and two on Lo Recordings. Early releases were on Rich's Flaw label and immediately established a hardcore fanbase for their instrumental fusions. First album, "Prince Blimey", was produced by the band and Tim 'Death In Vegas' Holmes and released to critical acclaim. A killer Glastonbury set in 1994 attracted Warp Records and mainstream attention and the 90s ended with Radio 1 playlisting the "Making Bones" single "Image Of You", and performances On Later with Jools Holland, MTV and many European TV shows. By now the band had played and worked with everyone from The Prodigy and Björk to Garbage and The Fugees – playing to audiences all over the world - while still pushing boundaries.
But in 2001, finding themselves ushered in a commercial direction, the fiercely independent trio split first from Warp, then from one other. They each found reward in solo projects: Rich through band Toob and DJing, Ali with new band Clayhill and David composing for TV.
Six years later however, after many prompts to return, they were asked to headline a Big Chill stage in 2007. they happily reformed, sensing unfinished business.
"Key" was written over 2 years and then recorded at Rich's house, the whole of which had been transformed into a temporary studio; upended sofas made isolation booths, amps and mics in bathrooms, bedrooms and kitchen, a trail of cables linking every room. The album was mixed at the excellent analogue set-up of Foel Studios. From the first track's 'on-stage' welcome, greeted by a roaring crowd, it captures the essence of a Red Snapper live show, while still working as a studio album. Its cohesion reflects the band's vibe: "We have a good laugh together: there's a dry sense of humour there. It's like a family." "Yeah, in the same way that you can have a brother who can really fucking piss you off," .
Today, the family's joined by brilliant jazz young-blood Tom Challenger, whose effect on the band can be seen clearly in the live arena and in his dark afro-tinged sax and clarinet lines. Guest vocals come from Eliza Carthy and UNKLE's Gavin Clark, who prove their cutting edge folk worth on "Loveboat" and "Jack". Mercury Prize nominee Eliza Carthy has been a huge Snapper fan since the early days and her warm powerful voice is a perfect complement to the band's grit. Gavin Clark has a beautiful voice that drips regret and melancholy – a truly unique singer. Ali himself even takes to the mic on "Architectronic" and "Great First Touch", the first time he's sung with the band. Classical, jazz and hip-hop influences remain strong, joined by dubstep and grime tinges to create a voodoo-cloaked, bluesy paranoia.
So, what are Red Snapper about? The band cite musical pioneers old and new as their inspirational soundboard. All of them agree they hear different sounds in each shared listening. Take away one member and the Red Snapper sound is lost. It's musical virtuosity without pretention – so raw, fast and loud when live it's hard to believe they play old-school instruments with no samples.
The band's fanbase has continued to grow, collecting a new generation of young music fiends along the way. Huge live shows in the UK, Russia, Ukraine, Greece, Holland, Belgium have seized the audiences and provoked mayhem. 'Key' is the strongest reflection of these changing surroundings that inspire the bands music; a reaction to the constantly changing background, whether it be a black sea beach, vodka fuelled breakfasts in Moscow, dark London streets or train journeys past Mount Olympus. But also, particularly in the light of recent dismissals of multi-culturalism, the band are proud that Key is a reflection of the myriad of sounds and ideas they are exposed to in the UK. The richness in people and noise.
Red Snapper remain a highly influential band committed to stretching themselves musically rather than playing the commercial game; their ever-developing adrenalin charged live shows are testament to this.

Red Snapper - Image Of You (with Alison David)