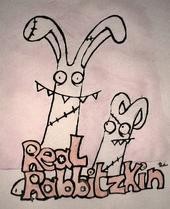 Location:
Towcester, UK
Type:
Artist / Band / Musician
Genre:
Rock / Indie
Site(s):
Site
BioConnections
Buick McKane
picto
WAV
Celeriac
leonjay
Clickshaft
Josh Extravaganza
Pocket Orchestra
Flux Pavilion
Before Real Rabitzkin was formed, there were 5 unique individuals, aged between 18 and 22, living on each other’s doorsteps in Towcester, Northamptonshire, England. Their good taste and non-pareil talents in music have united them as one, to create a diverse and interesting music-making machine. The bands sound is a youthful and original energy with a backbone of inspiration of the greats that have gone before them. Inspired by bands like the Eagles, Pink Floyd and Dire Straits, Real Rabitzkin are first and foremost a rock band.
Real Rabitzkin consists of 2 lead vocalists complementing each other in harmonious bliss (1 of which is the drummer, the other being a guitarist and harmonica player). The band features 2 lead guitarists that play as if controlled by 1 crazy brain, a bass player that will slap and tickle you till you are red in the face, a drummer that will have you moving uncontrollably and a keyboard/ synth player adding that little extra to tantalize you with. Real Rabitzkin will never fail to please, and are influenced by such a diverse range of artists, they will have something for all shapes and sizes!
The bands recent achievements include having their songs aired on BBC Cambridgeshire radio as well as making the top 10 in the stations local chart. In addition to this the band regularly plays to large audiences, which have most recently included Park Life Festival in Milton Keynes (www.parklifefest.co.uk) at which more than 3000 people attended, they will also perform on the same bill as DR Feelgood, Stray and The Blockheads at Rockinbeerfest in Cambridge in the summer 2007. The band will be playing to an expected crowd of 4000 at this years Folk on The Green festival in Milton Keynes and are also booked for the Birmingham and the Camden Barfly. The bands proudest achievement is being voted No1 by the public for 5 weeks on BBC Northamptonshires Weekender Chart with their song “Just a Shadow”. Real Rabitzkin were the first band to perform to the public on the main stage at Northamptonshires biggest music venue The Roadmender when it re-opened October 2006, live footage from this performance appears on their music video for their song “Lonely Man” which is viewable at www.myspace.com/realrabitzkin.
Real Rabitzkin do their best to meet up as much as possible to work on their live performance, which could get even a room full of hip-op patients on their feet grooving. With a huge ambition to succeed and a serious attitude towards music, the ‘rabbits’ will persist in bringing their music to ears in every corner of the world.