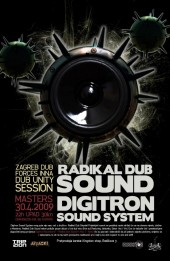 produce and play digital dub which is by definition closest to UK dub. The members are:

is usually mixed in studio - Every part of the tune stripped to the mixer board and manipulated to get new version every time it's played. So, it's not the usual concept of soundsystem which selects plates, but plays own digital dub in live mix.

Until now we often played gigs together with our mother band, but also

as solo act, and made colaborations with people such as MC Popeye, Jah Free, Ras T-Weed, Abassi All Stars, Sir Larsie I.

Radikal Dub Kolektiv on a Trip to CroReggae