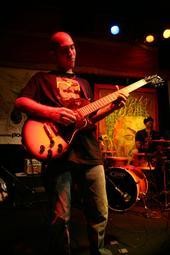 Location:
VAN NUYS, CALIFORNIA, US
Type:
Artist / Band / Musician
Genre:
Reggae / Acoustic / Latin
Site(s):
Site
Label:
Indie
BioConnections
Geva Alon
Modern Sound Productions
Poopan.
Rafi started playing the guitar in Israel, at the age of 12. He formed his first band at 13 and has been writing and performing music ever since.

He has also been writing, performing, and recording music in a band called Poopan since 1997. Poopan is a mix of Funk, Reggae, Drum N Bass, Acid Jazz, and World Grooves. They have shared the stage with top national acts such as Black Eye Peas, Mix Master Mike (DJ from the Beastie Boys), Xzibit, Pennywise, and Alkaholiks. They are currently releasing their third CD.

Rafi is determined to continue to release new and different flavors and to grow and challenge himself as a musician, guitar player, and songwriter.

If you prefer to buy Downloads over Cds, You can Download my Album below:

Sitting on the Dock of the bay - Rafi Levy Band