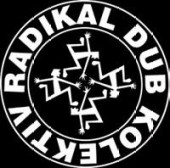 Location:
Zagreb, CT
Type:
Artist / Band / Musician
Genre:
Dub / Reggae
Site(s):
Site
Label:
Universal egg, Kingston,Zvuk Mocvare,Humanita nova
Type:
Indie
BioConnections
zion train
Brain Damage
p.a.i.n
Radical Dance Faction
Chang Ffos
O.B.F Soundsystem
RADIKAL DUB SOUNDSYSTEM
JAHSTICE SOUND
Ital Horns
jah free
roots`n`fruits
Radikal dub kolektiv was formed in 2002.and is based on d.i.y. underground ethics. It consists today of; Vanja – keys, Jadranko – guitar, Vrki – bass, Vedran – drums and Damir – sound.
On the first album (2004), we started to create a sound with our combination of dub, reggae, ska, punkrock and trance/ambient sounds. The material on ‘Bass Matters’ represents the beginning of an new era for the band, when we concentrated on playing and producing live, upbeat dub music. Even though some of these songs are already 2 years old, this is the first release of studio recordings of them, and we think they still contain new energy. Since our first album was released, we lost almost half of the band; due to maternity, personal issues, differing attitudes and death!
Despite all this we somehow managed to almost continually play shows including a couple of European tours, and a good number of one off shows.
We will be touring hard for the foreseeable future also.

Members of the Kolektiv were and still are involved in many different activities; such as playing with other bands (Abrakha-dub-r, Bijes zdravog razuma, Bilk, Drotweiler, Motus, Nula, Radikalna promjena, and others), music publishing and distribution through labels:like Humanita Nova, Zvuk Mocvare, and Kingston, party and event promotion

Alongside the music we all want and work for this world to be a better place. Yeah. Rispekt.

This profile was edited with MySpace Help - Profile Creator and EditorMySpaceProfile Help!

Radikal Dub Kolektiv on a Trip to CroReggae