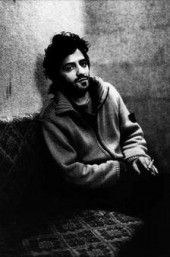 Location:
FR
Type:
Artist / Band / Musician
Genre:
Experimental / Indie / Afro-beat
Site(s):
Site
Type:
Indie
BioConnections
Azam Ali
Natacha Atlas
Ramallah Underground
Aliza Hava
Who are you?” “Who am I?” It sounds like there’s an existential storm broiling deep inside the soul of France’s number 1 musical upsetter. ‘Tékitoi?’, the title of the latest in a long line of probing, provocative and highly original Rachid Taha releases, is a punchy piece of French street lingo whose tone actually says something more like “Who the hell are you?”. If Taha is feeling the need to ask himself and others the most basic questions, then at least he’s doing it with all the verve and vivacity of a straight-jabbing southpaw boxer.

But that’s the man all over. Some strange mutation in the Taha gene over forty-six years ago created a phenomenon as rare as as an albino tiger; a musician of Arabic origin with the courage, intelligence and insight to speak the truth as he sees it, loud and direct, without the softening comforts of metaphor, parable or nostalgia. Or perhaps this uniqueness can be put down to the simple fact that music hit Taha, and vice versa, in the first few years of the 1980s, a period when rock’n’roll still meant rebellion rather than dollars, and when young North African immigrants and sons of immigrants living in France were beginning to shake off decades of timidity with their very own equivalent of America’s Black Pride movement.

Rachid Taha was born in Oran, western Algeria, and spent his first ten years in the Algerian town of Sig, famous for its olives. Defeated by the legacy of war and the political corruption of Algeria’s new rulers, Rachid’s father moved the family to France in 1968. After a village adolescence and fruitless stint in a catholic school, Rachid took the first of many parachuteless leaps into the void at the end of his teens by leaving the family home in the picturesque eastern French province of les Vosges and moving to Lyon. The false security of the immigrant ghetto is something that he has tried to avoid all his life. “You have to be an adventurer,” he says. “Just staying in your own community is more to do with laziness. It’s conformism.” In the big bad city, Rachid was greeted by the concrete-hard reality of racism. A shitty factory job was almost inevitable, but the impulse to set up a club with his mates in order to provide an alternative to the city’s established and often overtly racist nitespots definitely wasn’t. There, at ‘Les Refoulés’ (‘The Repressed’), Taha hit the decks and span everything from Oum Khalthoum to Kraftwerk, with salvos of The Clash, Led Zep, The Who, Neil Young and Johnny Cash mixed in between.

It was a musical education to die for. When Taha formed his first band Carte de Sejour (Green Card) with a couple of North African mates from the heating appliance factory where he was working at the time, it was soon clear that a completely new voice had arrived on the scene, one that had very little to do with the cabaret rebellion of Algerian rai music, and everything to do with pure rock’n’roll energy and defiance. Rather than smother protest in the cotton wool of metaphor, the Arabic way, Rachid indulged his natural appetite for challenging gestures and open revolt. Carte de Sejour stirred up a twister of outrage and irony by releasing an arabesque cover of Charles Trenet’s ‘Douce France’, a sentimental wartime ballad beloved of nationalists and red-faced patriots. He then persuaded Mitterand’s notorious minister of culture, Jack Laing, to distribute copies of the single to every member of the French parliament. Rachid Taha was undoubtedly France’s first real punk, with balls, brains and plenty of heart to boot.

Since then Rachid Taha has gone solo and never looked back. Looking back is the quickest way to dusty death in his book. His twenty-two year collaboration with the English producer Steve Hillage has created a whole canon of innovative, powerful and enduring songs which jostle rock, electronic and North African influences in the service of honesty and risk. ‘Voilà Voilà’ was like a national wake up call to the growing tide of racism in France, and a one-off marriage of the physical hedonism of techno with the verbal attack of protest music. “I think therefore I dance!” is Rachid’s philisophical summary of this unique approach. The album ‘Olé Olé’ was a head-on collision between the sounds of the Maghreb and techno culture, and its cover, depicting a peroxide blue-eyed Taha, was a perfect piece of social and sexual disorientation. ‘Diwan’ was an homage to the Arabic and North African stars of yesteryear or “my equivalent to John Lennon’s ‘Rock ‘n’ Roll’ album”, as Rachid himself calls it. Rachid and Hillage skilful restoration work was rewarded with the ballistic success of ‘Ya Rayah’, a brilliant 21st century ressurrection of a classic song, which broke into clubland and rode the charts in France and far off places like Lebanon and Colombia. ‘1-2-3 Soleil’, the live recording of Taha’s epoch-making encounter with rai rulers Khaled and Faudel at the Bercy stadium in Paris in 1998, was a million seller which hoisted the name of Rachid Taha overground in one neat strike. ‘Made In Medina’, released in 2000, heralded a new maturity, a new fascination with the voodoo roots of rock and trance, and a new obsession with the dark and gathering storm clouds on society’s horizons. The album picked up a ‘Victoires de la Musique’ statuette, the French equivalent of a Grammy, in 2001.

It took three years of hard touring to reveal ‘Made in Medina’ to the world. Rachid and his long-standing band of fellow-adventurers visited far off places like Istanbul, Tokyo, New Caledonia, Mexico City, Saigon, Phnom Penh, Ottawa, LA, Adelaide and performed at WOMAD festivals here and there. During those nomadic years a new album was already brewing. “I dreamed of singing my nightmares,” says Taha. The apocalyptic vision of a society careering into a wall was the impetus for a marathon of questioning; his motives, other people’s motives, the dirty victory of experience over innocence, the root causes of the virulent anger and chaos that grips our world. That’s what makes ‘Tékitoi?’ Taha’s most harrowing and yet fascinating album to date.

“I worked with Steve right from the beginning on this project,” Rachid recounts. “We’d never quite worked like that before but this time I wanted to do things differently and collaborate in the studio from the start.” Steve Hillage was already a big fan of Egyptian and Moroccon music when he first heard Carte de Séjour in the offices of Virgin France way back at the dawn of the 1980s. And with perfect synchronicity, Rachid had just become a fan of Steve’s thanks to a mangled psychedelic rock cover of an Oum Khalthoum track which featured on one of Steve’s latter solo albums. Steve ended up producing Carte de Séjour’s first album ‘Rhoromanie’ in 1983, and the two have collaborated unswervingly ever since. “Rachid has had a very consistent vision of where he wanted to go musically, right from the beginning,” Steve claims. “I remember visiting him in his dressing room after a Carte de Sejour gig in Lyons in 1982. He played me a cassette by the great Algerian chaabi singer M’hamed Hadj el Anka and said, “Hey, listen to this. It’s just like Robert Johnson. C’est le blues!””

In 2004 the world has got the blues, and got it bad. But ‘Tékitoi?’ is so much more than a one-dimensional gut rant about the dismal realities of a post 9/11 world. Its lyrics dovetail the personal and the universal, with the gouging power of a hawk’s beak. Although Rachid punches straight, he’s not afraid of a mental waltz or two with ambiguity or complexity when necessary. The opening track ‘Tékitoi?’, with its Clash meets Cramps meets Egyptian strings back beat, is a duo with Christian Olivier, lead singer of French nouvelle chanson rockers Les Têtes Raides. The song sets the tone by raising more questions than answers. In ‘Li Fet Met’, Rachid urges us to accept the past and face the future. “Nostalgia is a kind of pathology in a way,” he says. “I’m a little melancholic, but never nostalgic.” ‘Hassbouhoum’ is a song inspired by a demonstration in Algeria which Rachid saw on TV. The title is a slogan which the demonstrators used on banners and placards. It means something like ‘Get rid of them!’. ‘Safi’ is a poem of anger and frustration at the lack of democracy in the Arab world, and Rachid’s own search for a pure heart in the cynical wastelands of modernity. “It’s a naïve song, almost adolescent,” he says. In ‘Winta’, Rachid sings “When will I find peace? Where is paradise?” in a duet with the Georgian superstar Kaha Beri. ‘Nahseb’ is about time, the biggest oppressor of them all. “I’m forty-five now and I see time going by,” Rachid muses. ‘Dima’ which was co-produced by Brian Eno, tackles issues of freedom, danger and auto-censorship. “Freedom is the hardest thing, but it’s also the most generous.” Mamachi is a tribute to a rural rai singer of the same name from Oran, and the first man Rachid ever saw perform. It’s also a clue to the origins of Rachid’s rough and ready percussive vocal style. “Mamachi was very rock and roll,” remembers Rachid, “very close to Bob Dylan or Lou Reed, people like that.”

And last, but by no means least, there’s ‘Rock El Casbah’. In 1982 a young and eager Rachid went to see The Clash at The Mogador in Paris. “I don’t know about the others, but I especially liked Joe Strummer’s sincerity, his humor, his awkwardness,” Rachid reflects. “He had nothing to do with that typical punk cynicism. This cover is a tribute to him really.” Before the gig at the Mogador, Rachid met the band, spoke to them for a few minutes and handed over a tape of Carte de Séjour songs. “I felt that they were interested,” remembers Rachid, “but when they didn’t get in touch afterwards I just thought that’s life.” “Having said that, when I heard ‘Rock the Casbah’ later that year, I thought that maybe something really had happened after all,” he adds with a wry mischievous smile.