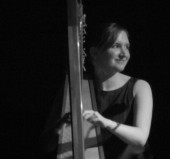 Location:
Edinburgh, US
Type:
Artist / Band / Musician
Genre:
Folk / Other / Fusion
BioConnections
Katie Doherty
Laura-Beth Salter
Peter Tickell
Kathleen Graham
Calum Stewart
Mairearad Green
Adam Sutherland
The Shee
James Dumbelton
Jonny Kearney
Lillias Kinsman-Blake
Vicars of Blyth
Lucy Farrell
Rachel and Lillias
Rachel Newton is from Edinburgh with strong family ties to the North-West Highlands. Attending a Gaelic medium school and through the work of the Feis movement, she soon discovered her passion for traditional music. Her upbringing in both Highland and City cultures has meant that she has been strongly influenced by a diversity of styles and this is evident in both her playing and singing. Rachel attended the prestigious City of Edinburgh Music School, and gained a BMus(Hons) in Folk and Traditional Music from the University of Newcastle-upon-Tyne where she became involved in many different projects. In her final year at Newcastle, as well as appearing on albums by course leaders Alistair Anderson and Sandra Kerr, Rachel released 'Dear Someone' with flautist Lillias Kinsman Blake and 'A Different Season' with BBC 2 Folk Award nominated The Shee. The Shee have gone on to release a second album, 'Decadence' and have performed at many of the major folk festivals and venues across the UK and beyond.

Rachel also has experience in performing music for theatre (winning a Critics Award for Theatre in Scotland 09 for Best Use of Music alongside her two colleagues in the Rowantree Theatre Company's 'Lasses O') and film (one of her songs is used on the soundtrack for the BIFA award winning film, 'The Inheritance'). In 2005, Rachel was a finalist in the BBC Scotland Young Traditional Musician of the Year.

I edited my profile at MySpaceSupport.com, check out these Myspace Layouts!